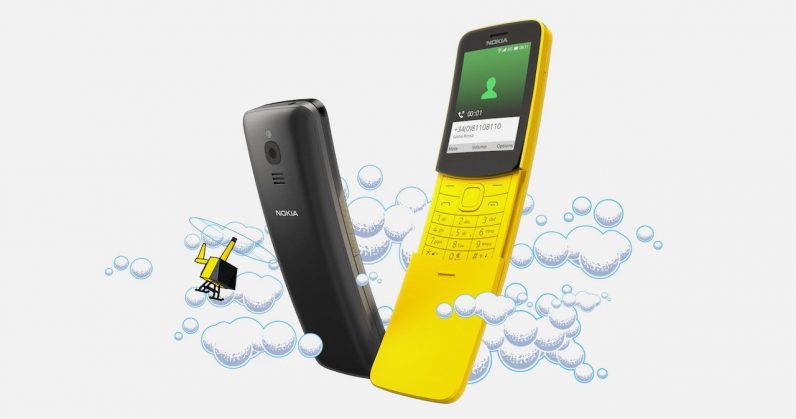 Nokia Mobile, under the licensed HMD Global has launched a Nokia 8110 Banana feature phone that was available during the “Nokia big time phone producers” in the Matrix Film way back in 1999.

For those that has watched the popular film during the 1999 must have seen Keanu Reeves who was famous for playing Neo with his Nokia 8110 “banana phone” and right now, Nokia is bringing the magic back by reviving the iconic 8110 from the film in the form of a 4G feature phone.

We could remember that last year, Nokia unveiled the Nokia 3310 during the MWC 2017 which looked somehow at first but then later during the year, we had different versions starting from 2G 3310 to new 3G 3310 and then newest 4G 3310.

But in 2018, Nokia decided to wow us and unleash the Nokia 7 Plus and banana phone from two decades ago with no leak specifications, this is the new 8110 4G feature that does not support antenna.

Below is the full specifications of the latest Nokia 8110.

The new 8110 phone arrives with a 2.4-inch QVGA display color screen (320 x 240 pixels) with a Polycarbonate shell design, (Nokia did not specify if the phone is indestructible phone).

The slightly curved handset has a slider that lets you answer and end calls, and HMD is creating traditional black and banana yellow versions. It arrives with a Drip protection (IP52).

Nokia 8110 4G has a curved protective cover you can slide open to pick up calls and slide back to end them. The unique shape also means you can spin the phone in ways you never imagined.

The phone is powered by a Qualcomm 205 chip that runs apps on Smart Feature OS powered by KaiOS. Meanwhile, you have a 512MB RAM and 4GB of storage and also comes with a 2MP rear camera with LED flash.

That means, with the rear camera, you can only take back pictures meanwhile it does not ship with front camera, in summary, the Nokia 8110 4G Reloaded did not arrive with front facing camera.

In other words, with the Smart Feature OS, the 8110 4G phone will not be able to gain access to the Android apps that is found on other Nokia Android smartphones.

That means, you might not use this device a whole lot to run mobile apps, the 4G modem might come in handy for turning the phone into a Hotspot so you can keep your laptop or tablet connected to the internet.

You can stream faster with 4G LTE. Plus, the wireless Hotspot feature lets you create your own Wi-Fi connection wherever you are. There includes WLAN IEEE 802.11 b/g/n, Bluetooth® 4.1, GPS/AGPS.

You can take on the classic Snake game. On the battery aspect, it arrives with a removable 1500 mAh battery and Nokia claims that you can get up to 25 days of standby time on a single charge with the 8110 with its dual SIM support. Watch the video below;

However, HMD is creating an app store for the device, which will include Facebook so there’s a chance other third parties might create their own apps for this.

According to HMD Nokia, the Nokia 8110 4G will  be available and will ship in May in classic black and bright yellow, for just 79 euros ($97).