It is quite unbelievable and at the same time sympathetic but lets all accept the rising facts, Zoto app as a payment portal is actually dead!

Note: They aren’t the first to stop or draw out of the business in 2018, Dell stopped making printers, pure tablets. Even Oppo stopped producing high-end headphones and Blu-ray players and many more others.

Being a phone zombie, or a regular internet users, then you must have noticed the unstoppable motion from a substantial app known as Zoto. At first, with Zoto app, you can win lots of airtime, and many more.

But over the past few months, the app is no longer working and it is out of league! The company assured us, and we assumed that they were actually conducting a big upgrade, that might revolutionized the company as a brand.

An upgrade that has been going on for months is purposeless and in vain. Lets see the rise of Zoto. The mobile platform for almost all kind of payment is right now known as “nugatory and valueless” 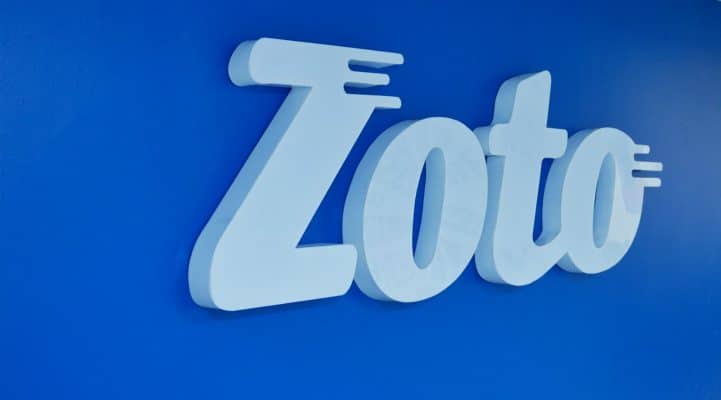 Who are Zoto app and how it works?

Zoto is the best way to recharge, buy data: pay bills anywhere in Nigeria. Its reliable, safe and super fast.

Using Zoto app as means of payments and recharging is quite simpler and easier (although, I’ve not tested it) but testimonies from users confirmed it. Downloading the app will even get you 50% Cashback, free N1000 On Referrals & Cashout and many more.

The Rise of Zoto App

A letter to our amazing Zoto users

It’s been almost three years since we started off at Zoto, giving some of the best deals on one of Nigeria’s most user-friendly, payment platforms. As at 2015, we had roughly 40k users. Today, we’re well above 1,000,000 with over 15k five star reviews on the Playstore.

I won’t see Zoto as a company who tricked users, and customers for their awesome freebies but I was seeing it as a business insights and strategy that was way too over-rated for its purpose!

Anyways, the word “best way to recharge” was a self-acclaimed intuition but it kind of worked for them. Zoto app rose with an eagle eye, dominating all other recharge apps but we are all guessing the cause of the failure might results as “too much freebies”

When you refer someone, you even gain more airtime but the truths is, customers or users weren’t downloading the app for mobile payments or recharging but for their own gain! That won’t prompt me to say customers are gullible.

Zoto app gained a prominent voice in the society, and a stunning appearance. Do you know that, Zoto has over 500,000 plus app download from Google playstore. “A warm smile for that achievement and very profound!

Businesses was actually built on top of Zoto app. A lot of customers gained over N10,000 cashouts from Zoto. Many 20,000, 50,000 and even 100,000 but never heard of millions. But everything might accumulate millions of naira.

The Fall of Zoto app

That was the rise of Zoto app but the fall is more sympathetic. We won’t elaborate on this but from the cries of customers (image and tweets proves) shows that Zoto app is actually gone!

so sorry to hear that.@myzoto would have been the best recharge platform if it had lasted.

A Mmaduekwe Ugochukwu from twitter asked Zoto co-founder, OSHONE Ikazoboh and the reply is heart touching!

The fall of Zoto app has been confirmed by Techpoint. Although, a credential blogger, yomiprof asked a serious question on 13th of July “What is Happening With Zoto? Have they pack up?”

The ranting of their customers continues on Google playstore, and every social media platform that holds the existence of the app, Facebook, Twitter. 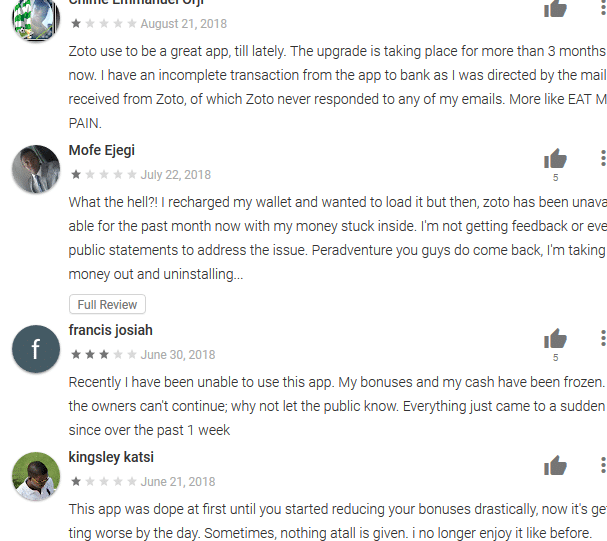 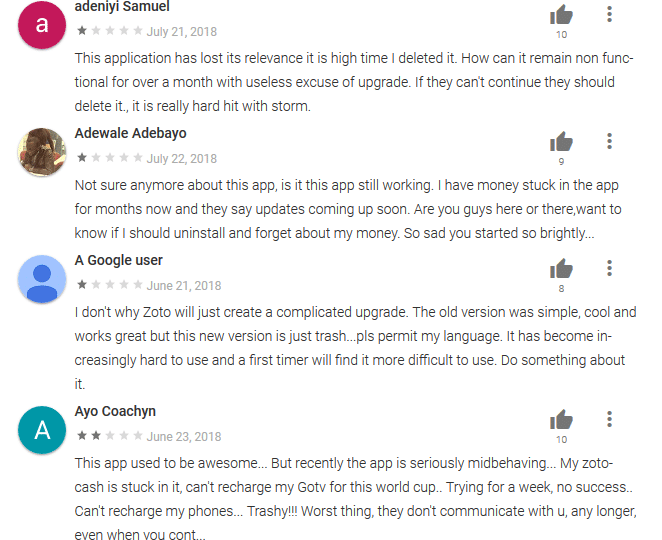 The 2015 / 2016 most respected app is highly insignificant today, but tomorrow might be a day for everyone to rejoice. I really don’t know or have any advise for upcoming startup or entrepreneurs out there but we learn from the mistakes of others.

We all look forward to partaking in a juicy moment, when Zoto comes back 100%. Providing an undiluted proficient and unlimited functional services. Starting up isn’t the issue but staying on the line is.

We really can’t tell if the app will recuperate and come back, this is what no one is sure about but it will be a thing of joy, if it does!

Nothing is cooler and more attractive than a big comeback, and that’ll be me – Steven Adler

My comeback was not about winning or losing; it was about the feeling of being able to compete at top level again. – Thomas Muster