The Chinese Smartphone maker, Xiaomi plans to ship its next 3rd generation under-display camera technology next year, 2021. And the company is taking its new tech to mass-production.

It is apparent that Android Smartphones will start shifting from the notches to a full-screen display. In the process of reaching that goal, 2020 might be last year to see a hole-punch selfie, at least for flagship phones.

However, Xiaomi plans on shipping this technology next year, but ZTE’s confirmed that it’s Axon 20 5G Smartphone would be unveiled with an under-display camera on September 1st.

Smartphone makers have been testing under-display cameras for the last couple of years, such as Xiaomi back in June 2019. Even OPPO and Samsung Display have released a working prototype. Although, VIVO wanted to show off its own, but did not because of the canceled MWC. 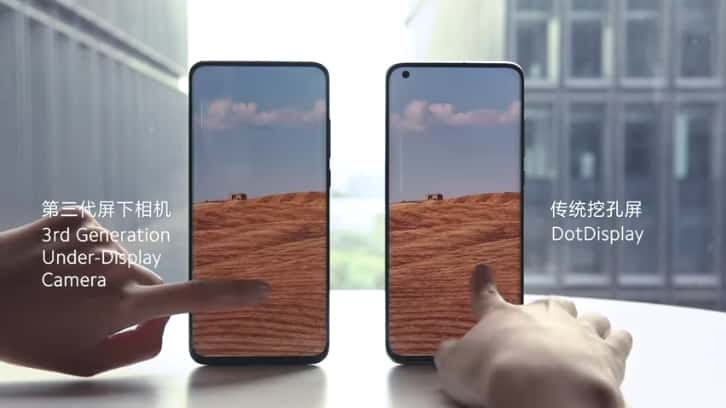 We believe that the technology is mature enough to make its way to consumers. Tho, earlier this year, the Chinese OEM Xiaomi explained that its under-screen camera tech was far from achieving mass production.

However, the new upcoming Xiaomi under-display tech allows the selfie camera to see through the gaps in the display’s sub-pixels, which are the red, green, and blue dots that combine to make each pixel.

The company said that the display tech can “perfectly disguise” the selfie camera underneath as the area of the display above the camera has the same density of pixels as the rest of the screen.

In addition to that, Xiaomi says that the selfie camera itself should match the performance of more typical front-facing cameras, and the OLED or LCD panel resolution screen area above the camera should match the “brightness, color gamut, and color accuracy” of the rest of the display.

TheVerge reported that in Xiaomi’s promotional video, around the 0:29 mark shows a small square shadow visible behind the display. With that, we can’t confirm if the tech is perfectly disguised.