Xiaomi Black Shark Helo has been announced. Prior to this date and time, the newly unveiled display is also known as the Xiaomi Black Shark 2, but with the addition of “Helo” it just seems to be a bigger upgrade and the professional version.

All thanks to Razer phone launch, gaming Smartphone industry has awoken from its deep sleep, bringing more powerful panels, processor, faster and seamless performance and a matured 120Ghz display coupled with 8GB RAM. Lets see what the Xiaomi Black Shark Helo got in box for us. 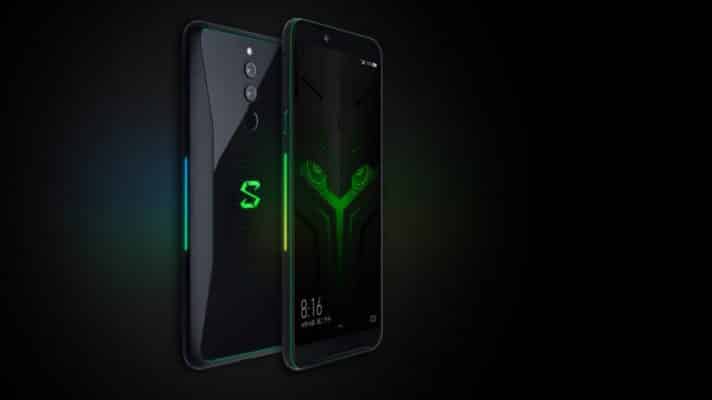 The Xiaomi Black Shark Helo is a pure Android Smartphone that serves as big sequel to the first variant, Xiaomi Black Shark. One of the major difference between the both gaming handsets, is the AMOLED display on the Helo. Meanwhile, we all know that the Black Shark comes with LCD panel.

Black Shark is purely backed by the Chinese company, Xiaomi mobile. The new company took to stage in Beijing, China during April, to launch the first Black Shark and today, here is the updated version, Black Shark Helo. It comes with a notch-less display.

Featuring a 6-inch AMOLED Full HD+ 2160 x 1080 display with HDR content view, with 18:9 aspect ratio, PPI of 402 pixels per inch. And it uses Iris mobile video processor from Pixelworks to deliver picture quality enhancements. There is also a refined design on the front and back, and sitting along the edge of the frame is a front-mounted stereo speaker.

The Black Shark Helo or Black Shark 2 looks much more like a 2018 Smartphone, at the top and bottom borders, the bezels are much more slimmer, thinner and smaller. And it ditches that physical key. Hence, providing a more comfortable device to hold in your hands.

It arrives with a glass combined with aluminum frame, which curve slightly on both side of the screen display. The differences aren’t much but it is meant to compete with the latest gaming handset, Razor 2! There is a a customized LED light strip to the side of the phone.

Razer did an incredible job in providing their first Smartphone, which delivers an impressive stunts in the markets but failed woefully in the camera aspect, anyways, they did a better job at the updated variants, the Razer Phone 2.

The Black Shark 2 is powered by a Qualcomm Snapdragon 845 chipset, which is the same with the Razer 2 and the first Black Shark, coupled with Adreno 630 GPU. It arrives in three different variants, 6GB RAM + 8GB RAM and then, there is the “Sports Edition” 10GB RAM version – Say hello, to the first Smartphone with 10GB RAM.

Storage options includes 128GB and 256GB, and a 4000mAh battery capacity, with Quick Charge 3.0, and can stay for more hours under a single charge. Lets take a look at the gaming aspect feature: 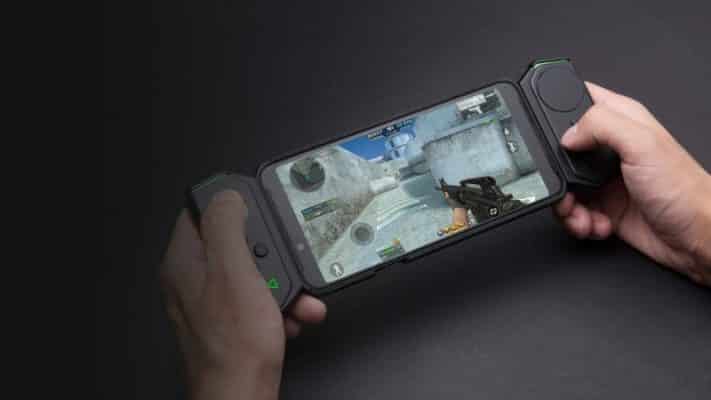 There is a hardware key to activate performance mode, another is a Gamer Studio feature, which lets you tweak processor, touch, display, network and other parameters for specific games. And can be shared via “Shark Code.” Xiaomi announced a controller dock for the Black Shark Helo, called Black Shark Biplane Handle.

Arrives with two gamepad attachments for either side of the phone, call it Bluetooth game controller, which can slides into the bottom and top of the Smartphone, to provide more viewing space and when you are done, slide it out. You’ll get one attachment for the 6GB and 8GB model in the box, but the 10GB variant gets both gamepad attachments.

The Xiaomi Black Shark comes with a new dual pipe vapor-chamber liquid cooling system, which prevent the handset from overheating during intensive games. Don’t forget about the RGB lights, it is a customizable backlit logo and much like the Razer Phone 2 and ASUS ROG Phone.

For the main time, the phone isn’t leaving China. Black Shark Helo will only be available to in China and will starts shipping on October 30. The prices are different due to the models:

The pricing is relatively economically and precisely cheap and affordable. Meanwhile, the Razer Phone 2 with 8GB RAM costs $799. However, the 10GB RAM model will not ship until December 12th. Probably, the Oppo Find X, or Xiaomi Mix 3 will overtake and win the race of being the first 10GB RAM mobile phone.