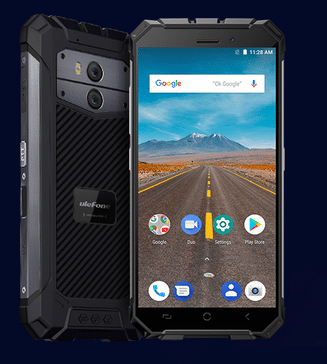 The Ulefone Armor X is among the top 3 devices that was recently unveiled by Ulefone in 2018. The Armor X Smartphone runs on Android Oreo. Definitely, you could tell, it is a rugged phone from its model name, packs some similar specs with the Ulefone Power 5.

The Smartphone is enhanced with rugged features and with 2018 design. The handset is powered by a IP68 dust-proof and waterproof protection, that means, the phone can withstand ultimate life challenges for all kind of professions and exercise training; Hiking, Firefighter, swimming etc.

At first, rugged Android phones just comes with features meant for outdoor exercises, strong handwork, demanding works and many others but stuffs changes around and the Armor X is a piece of beauty to behold!

Surprisingly for a rugged phone, the Armor X features 18:9 all screen display at normal 720p. It comes with shock- resistant TPU while some parts are made with glass fiber, polycarbonate and metal, you don’t need to worry about damage on some part with Corning Gorilla Glass coated display.

The Ulefone Armor X rugged phone comes with impressive design on the front, back, edges and being a protected phone for all kind of professions and works, the phone is certified to highest IP68 rating (dust-proof and waterproof protection), means that, it can ‘ withstand 1.5 hours of immersion in 1.5 meters of water or 24 hours of submersion in 1 meter of concrete. Meanwhile, it can also withstand big drops up to 1.2 meters’ as the company explained.

The phone offers a 5.5 inch HD+ 18:9 capacitive touch screen with 1440×720 pixels and offers 293 PP1. The Armor X doesn’t just meet the need of men that works in hard situation or partakes in rigorous exercise, it is also made to stand up to extreme temperatures, hot or cold.

Despite being a rugged Smartphone, you can still take some cool selfies and shoot high rated videos during the exercise or leisure period time after your demanding job, well, the Armor X doesn’t not disappoint you.

The Ulefone Armor X Android Smartphone is powered by a 1.5GHz 4-Core MTK6739 quad-core CPU processor with 2GB of RAM, which such high processor performance, the phone is able to play sophisticated and intensive games, switch in-between apps, stream movies without ever slowing down your phone.

On the storage options, the phone features a 16GB of internal storage and it is expandable up to 256GB via Micro SD card, you can now store all your pictures, media, and files.

The phone is fueled by 5500mAh battery, which offers 5V/2A fast charge, up to 250Hrs standby, 20 hours talk, 30 hours Music and 10 hours of Video and it empowered by Qi Wireless Charge.

The handset is available for purchase and it is priced at $130 / N46,800 / KSh 13, for each units. The Ulefone Armor X one of the finest rugged phone with special effects on modern life strategy.