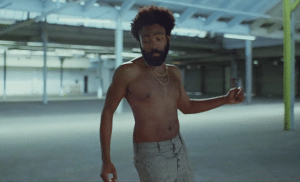 Youtube has listed the top 10 music video on their platform in 2018 and ‘This is America’ by Donald Glover, who is also known as Childish Gambino. You decide, which of the names, you would like to know him with.

The popularity of the video comes from the reading of the music video by expert. Right now, it has over 173million, approximately, 173,466,216million views. Anyways, the video has been interpreted from different orators.

There is two severe killings on the videos, watch the video with curiosity, carefully and you would realize the in-depth explanation. Everything is important here, the starting, facial expression, the dancing (qwara qwara from SA), the background and many other stuffs.

The way he protects his gun, the way he killed, teens using phones inside the cells, after each killing, he kind of portraits a dancing scene. And what got me, is the choir killing and there is a Police car there. He uses OLD cards instead of newer ones, someone was falling at the background and at the end, he was running from group of persons! Every details matters.