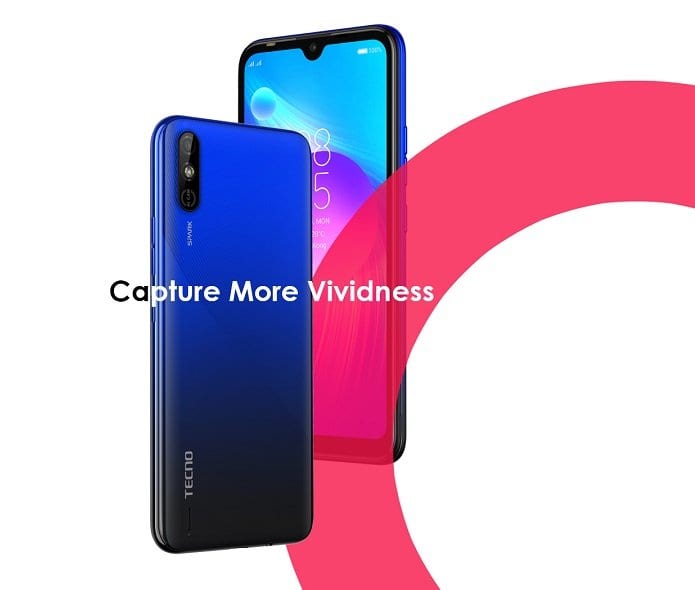 Looking at the phone model’s name, you will be forced to believe that it is an Android GO device, but it purely runs on Android 9 Pie OS with the company’s HiOS Skin on top.

However, the Spark GO comes with almost identical specs and features to the recently announced Spark 4 AIR. Recall that both phones were announced in Bangladesh in South Asia, middle east. It is available in two major variants.

Like the Spark 4 AIR, the phone arrives with the same 6.1-inch, IPS LCD capacitive touchscreen, 1560 x 720 pixels resolution with a reputable screen to body ratio.

Thanks to the water-drop notch display, which the company calls DOT notch design, there are smaller and slimmer bezels around the screen display with its glossy appealing back panel.

The device comes with a rear-mounted fingerprint sensor scanner. Arrives with a single selfie snapper and rear camera sensor. Thankfully, the power on/off, volume up/down buttons sit at the sides of the phone.

Coming down to the optics aspect, the Spark GO sports a vertically mounted single rear camera lens, with a dual flash at the center. Along with a single front-facing camera sensor.

The back panel of the new mobile phone sports a single camera lens, AI-powered 8-megapixels rear camera with Dual Flash. Which can take bright photo shoots, and it comes with other few AI features.

While the DOT notch display design hosts a single 5-megapixels front camera with Flash. With a selfie shooter, you can take stunning selfie shots. It also supports Face Unlock 2.0 and the video chat beauty mode feature.

Spark GO is powered by a MediaTek Helio A22 chipset, clocked at a 2.0 GHz Quad-Core processor coupled with 1GB and 2GB of RAM along with an acceptable GPU for intensive gaming.

The device comes with a 16GB of internal storage, which allows you to store more files such photos, movies, music, games, application and other. You can also double the storage with the use of a MicroSD card slot.

Tecno ensures that the phone has much faster performance, runs on the latest Android 9.0 Pie out of the box, with the company’s HiOS Skin on top. It is also backed by a 3,000mAh battery capacity.

Well, the Spark GO main difference from the Spark 4 AIR is the camera lens, storage, and RAM. While every other specs remains the same. Tecno Spark series are getting increasing better.

Spark GO is priced around N30,000 / UGX299,000 / KSh8,400 in different country’s currency. Like I already said, the new mobile phone was unveiled in Bangladesh in South Asia, and may arrive in Africa, Nigeria later on.