This is the Tecno Pop 2 Pro Android Smartphone, and it arrives with 5.5-inch IPS LCD capacitive touchscreen, 960 x 480 pixels, and runs on Android 8.1 Oreo (Go Edition) with 1GB Of RAM.

Few weeks ago, the Chinese Smartphone maker, Tecno mobile announces the Pop 2 but today, here is the successor with slightly upgraded features.

Undoubtedly, the Tecno Pop 2 Pro arrives with bunch of impressive features, but most of its specs are drawn from its predecessor, Tecno Pop 2. 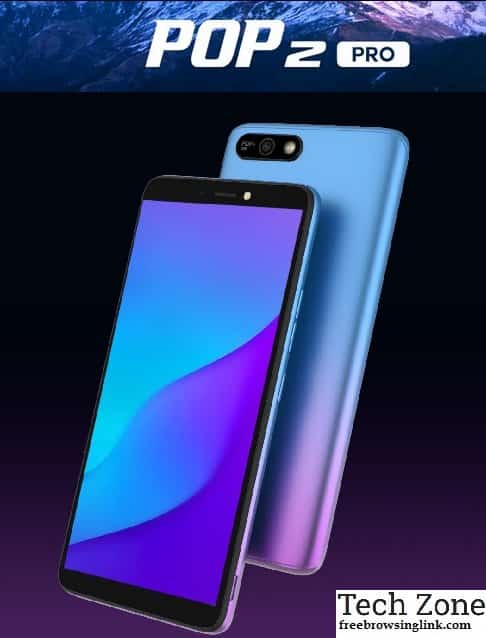 The Tecno Pop 2 Pro Android Smartphone sports some quite alluring design, and it is very much comfortable when holding it in your hands.

It slimmer bezels are enlightening, coupled with the magnificent thinner bezels and borders at the top and sides. Although, there is a chin at the bottom.

The handset packs a 5.5-inch Fullview display 18:9 480p display. It can delivers colorful image and video display, when scrolling through your pictures or watching movies.

And like the predecessor, it is also available in Champagne Gold, Midnight Black, City Blue color options, and it comes with a fingerprint sensor scanner at the back.

For the optics, the Tecno Pop 2 Pro comes with a single camera lens at the front and back, but they are both supported by LED flash for taking crystal clear images.

At the front, the phone arrives with a 8-megapixels front camera with LED flash and AI beautification. This isn’t different from its predecessor. It also doubles as Face ID Unlock.

But the back camera is bringing something higher to the table, instead of the 5-megapixels on the Pop 2, Tecno Pop 2 Pro arrives with a 8-megapixels camera with f/2.2 aperture and LED flash for low light photography.

For the video coverage, the phone can shoot videos at 720p at 30fps per second. Thankfully, it also supports HDR and AutoFocus features.

It comes with GSM, WCDMA, EDGE, GPRS, WiFi and Bluetooth v4.2 as its network and connectivity, for browsing and connecting of phones.

While for the graphic performance, it sports a Mali-400MP2 GPU. This will help you play intensive games, but it has to be a low memory capacity, due to the 1GB of RAM.

But it will make multitasking and switching of apps easier and efficient. It arrives with 16GB of Internal storage, and can be expandable up to 64GB via a MicroSD card.

The Tecno Pop 2 Pro runs the company’s own HiOS 3.3 skin based on Android 8.1 Oreo Go Edition. This is an outdated Android OS for low-end Smartphone.

Unlike the Tecno Pop 2 Power that was launched in Bangladesh with 4000mAh, the Pop 2 Pro is completely fueled by a moderate 3050mAh, Long Standby battery capacity, which can last for few hours on a single charge.

The handset was launched in the Asia country, Bangladesh and will soon arrive in other countries. The price is speculated to be under $100. Anyways, this has not been confirmed by Tecno mobile!