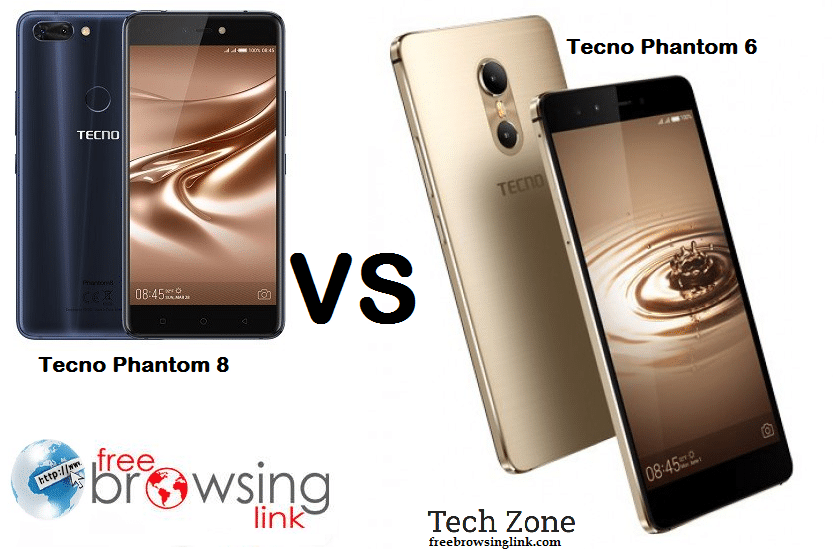 It is really surprising that, Tecno didn’t follow the bezel-less or near bezel-less design which is the latest era for their 2017 Phantom 8! But from that, it still feature some cool specifications.

Before we continue, you can notice that they are a lot of differences in specifications between both, of course, that is the paper work.

Lets take a look at the similarities and differences of the Phantom 6 and Phantom 8!

And the differences includes;

*. Design: Either body build or so. Tecno decided to shift from the Metal Build on Phantom 6 to Diamond Fire Design, promising to last more than its predecessor known as the former generations.

*. RAM: Congratulations to Phantom 8 for arriving with a 6GB of RAM while the Phantom 6 arrives with 3GB but that doesn’t makes it more powerful than the Phantom 6!

Although, with an extra 3GB of RAM on the Phantom 8, it can be a lot more useful, when handling your apps. Multitasking will be at its best!

*. Camera: They both comes with a two rear camera, might call them both dual camera but the phantom 8 camera is the real deal here! Not just on the back, the front will also WOW you!

At the back aspect, the Phantom 8 features a 12MP Sony IMX386 camera with 1.25um Ultra pixel Lens and a 13MP camera that are capable of 2x optical zoom and 10x digital zoom, according to the company!

While the Phantom 6 comes with a Dual 13.0 MP AF & 5.0 MP Dual Back Camera also capable of taking some cool pictures and images too!

*. Security: One odd specs that gave the Phantom 8 away is the fact that it doesn’t come with Eye Scanner V2.0, allowing you to unlock the phone 300ms faster but the Phantom 6 does.

Still on the security, the Phantom 8 proudly comes with Fingerprint Scanner located at the back side but the Phantom 6 lacks that. Though, it is something to be proud of too!

Both devices boasts of normal day to day password integration which includes the Password, Pin, Pattern or Slide!

Any stuff that is not listed above in bold line seems to be similarities. They includes:

N/B: Am I Missing Some Differences or Similarities Here? Please notify using the comment box!