Tecno L8 Plus Specs and Price in Nigeria 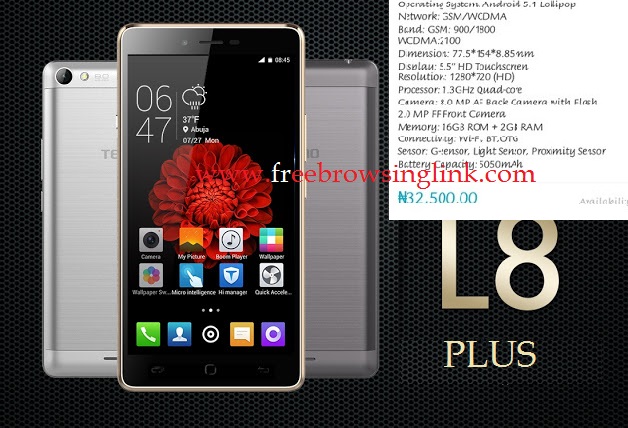 Tecno Mobile launched Tecno L8 Plus which is another simple and standard Android Smartphone, that will definitely acts as a successor of Tecno L8. Below are the Tecno L8 Plus.

After some few months of Launching the monster device known as Tecno L8 Android Smartphone which comes with the 5050mAH battery that can stay for few days of operation without ringing that awful sound called “Low Battery”.

This newly launched Android Smartphone has nothing more to compare with the L8, because it arrives with the same Monster Battery, the same inches and the same Android Operating System.

I would have preferred the Tecno L8 Plus to come with a bigger Screen like 6.0 inches like the Infinix Note 2 X600, with bigger Rear Front Facing Camera and back Rear Camera just like the  Tecno Camon C8!

The handset failed to be named the first L-series mobile phone to come with 4G LTE Network! The major difference between L8 and L8 Plus is, 1GB and 2GB RAM respectively.

Where to Buy Tecno L8 Plus in Nigeria

The Price of Tecno L8 Plus in Nigeria on Konga is Now ₦35,500. This device is was currently launched in Nigeria and it will be available to you.

Anytime the Online stores comes up with it, we will definitely alert you here on this particular page. What is you thought on this Device? Do you love it or your opinion.