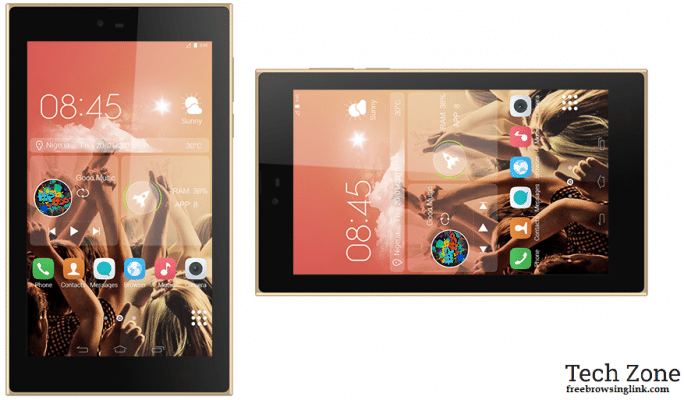 The Tecno Droipad 7C is another decent and affordable Tecno Android Tablet, it features a 7-inches diagonal touchscreen with a resolution of 1024 x 600 pixels for a pixel density of 170 pixels per inch. That is something for such a budgeted tablet.

In the Tecno Droipad 7C Android tablet is a sophisticated Tecno tablet with attractive screen display, which is definitely meant for customers with small hands. And it is easy to carry around, unlike the heavy Tecno Droipad 10D.

The camera on the Tecno Droipad 7C is quite low, it comes with a 2-megapixels as the main camera, packs a LED flash and Autofocus features, while on the selfie snapper, you have got the VGA functions, that acts as an 0.3-megapixels sensor.

It is among the top tablet to come with 1GB RAM, we can’t see the 2GB RAM here but the dual-core MediaTek MT6572 running at 1.3GHz dual-core Processor, is something that will definitely balance in-between multitasking, performance and battery optimization.

The new Tecno tablet features an 8GB of internal storage and a resounding 3000mAh battery capacity, this will keep the phone going on for a long period of time!

The price of the Tecno Droipad 7C is within the range of N25k – N30k. It is one of the best intriguing tablet device to be categorized under N30k.