In the hierarchy of the Camon series, customers, viewers would rate the Tecno Camon X Pro as the best! The Camon X Pro is the bigger variants when compared to Camon X! It comes with some juicy and spicy specifications and features.

The camon series are especially made for selfies addicts and the Transsion holdings company, Tecno Mobile aren’t backing down on that, with the new Camon X pro (CA8) selfie camera with lightening, you can flood your social media platforms with amazing selfies, photos and pictures of friends and families too.

2018 marks the first year, Tecno Mobile announced phones with the latest trending display design, 18:9 aspect ratio. This allows company’s to introduced bigger phones screen size like 6′ inches plus in a more smaller package. After all, no one loves holding phones in a big and mighty rectangular form. 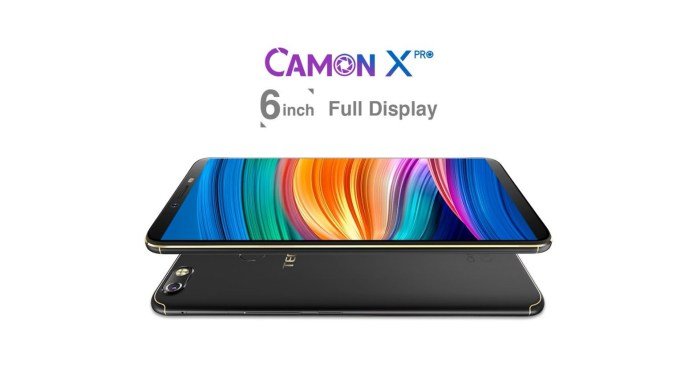 The same design and display as seen on the Camon X. Trimmed bezels (near bezel-less display), rounded corners, no physical home button and the company decisively, ditched the notch display design. It is one of the thinnest and slimmest phone from Tecno in 2018.

The phone comes with huge 6-inch FHD screen 18:9 FullView screen giving you an Infinity Vision. The screen-to-body ratio is quiet high, looking around, 80-90%-screen-to-body ratio. With the 18:9 aspect ratio, you can hold the phone comfortably with just one hand and it is lighter on weight.

With a 157.95 mm height, width of 75.2 mm and 5.2mm visual thickness, you really don’t have to hold a wide and heavy device in your hand any longer. Unlike the Camon X, the Pro version comes with a higher screen resolution of 2160 x 1080 pixels, providing a higher screen design.

The screen is also covered by a 2.5D glass protection. While the top bezels on the phone also comes with selfie camera, receiver and LED flash. The phone is available in Midnight Black, Bordeaux Red.

The new phone is aimed at the camera aspect, where you have a 24MP selfie camera, that is also available on the Vivo V9. The front camera on the phone is able to take some cool selfie photos and images.

Still on the selfie camera, the 24MP with f/2.2 aperture is also presented with dual flash. Which also supports the Face ID feature. While on the back (rear), the phone gives you a 16MP shooter with ring flash and super pixels too. Taking pictures looks more better and preferable with the Camon X pro!

You won’t believe that Camon X pro also comes with bokeh effect selfies. And you can blur out the background with the effect too, take crystal clear photos under direct sunlight. There is the company’s super PD focus technology, which tracks and captures sequences of moving objects in sharp focus.

The phone comes with a GSM, WCDMA, GPS, LTE network connectivity, WI-Fi, Bluetooth v4.2. With the LTE connectivity, you can browse more faster and download more.

Tecno may have focused on the camera aspect on the Camon X Pro, making it the selling point for the device in market; that means, we may have had the fiasco to detect the much respected processor, it came with.

The phone comes with a powerful processor, there is the Mediatek’s helio P23 and runs on a respected 2.0GHz Octa-Core processor coupled with a 4GB of RAM, that keeps multitasking at a more equilibrium level. Tho, current phones comes with either double-, tri- or hexa- processor.

The single processor keeps the Camon X pro at the mid-range level. Giving it the capability to keep your apps running in a smooth line and also you can play high-end intense graphic games too, this time around, more smoothly too.

The Tecno Camon x Pro runs on Android 8.1 Oreo, which is the latest OS for Android with the company HiOS UI on top. The HiOS UI is capable of detecting the much heating in the background and has the ability to cools off the phone through a series of methods such as background cleaning.

On the memory storage, the phone sports a high 64GB of internal storage that can also be expanded via Micro SD card. So, you can save more documents, musics, movies and more of your photos.

The Tecno Camon x Pro is fueled with the same 3750mAh battery capacity. And the company promises fast charging with the company’s light speed charging technology. Under 10minutes, your phone can charger up to 100%, as Tecno promises.

On the security aspect, the Tecno Camon x Pro sports a Face ID that allows you to unlock your phone more faster with the Facial recognition technology on the 24MP front facing camera.

In combination, the phone also come with Fingerprint sensor scanner that is mounted at the back under the camera pixels, it is a biometric option that allows you to unlock your phone, just by placing your hand at your back, well, it is not a magnetic case!

Right now, the price of the Tecno Camon x Pro is around ₦75,000 to ₦84,000, and it is available in Nigeria, Kenya, Ghana, and many other Africa, Asia countries.