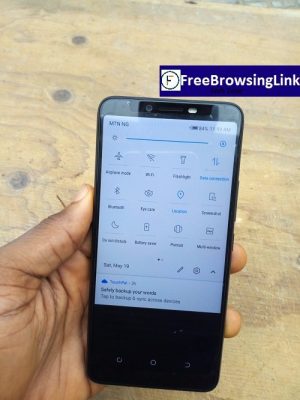 Obviously, Tecno has built a multi-billion-dollar business from numerous mysterious devices, which were launched few years ago and the latest Tecno Camon X Android is proudly one of them. Officially, this is the Tecno Camon X CA7 Review, lets take a look at one of the best Smartphone from Tecno yet!

Seriously, have I ever held a Smartphone that is as light as this? Not sure, not sure! Obviously, Chinese companies are really getting more standard by the day. Going beyond the line to give their customers, the best and certainly, what they deserved.

Definitely, the packaging looks always the same but not the device itself. On beholding the phone with my eyes, it is so attractive but I had to propelled myself forward with a strong-hard knock to focus on whats important.

Is the Tecno Camon X a mid-ranger or a high-end Smartphone? At this moment, I really don’t care anymore. The phone feels good and right to stay with and hold, overall, you might get obsessed with the phone, so you may need self control. We all know the specs right? Anyways, lets quickly take a look at the complete specs and features. 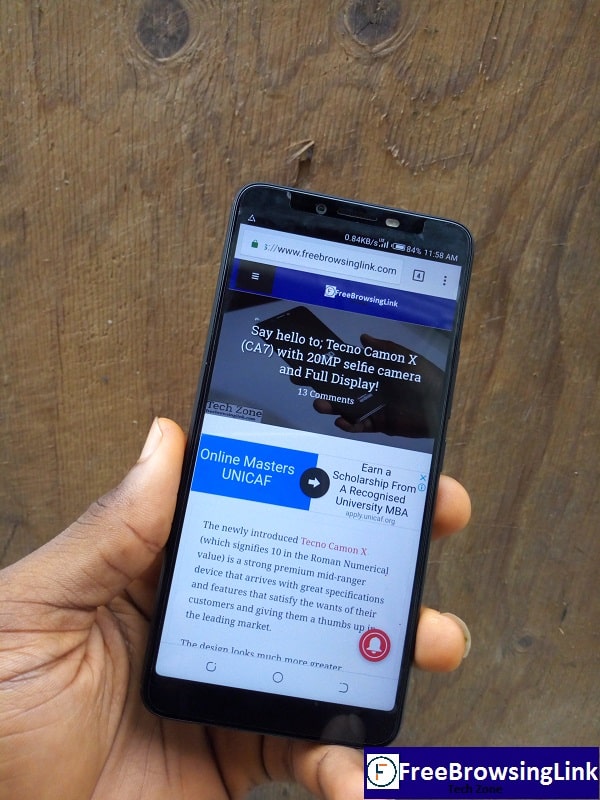 How much is the Tecno Camon X?

It sound cruel to say that Camon CM and Camon CX has step-down a little bit for the Camon X. The costs of Camon CM (as of today) is N45k while the Camon CX is priced at N54k.

But the new Camon X is priced at N60k approximately. You will get the phone at a more slated costs, like N2k off. It might be expensive but after comparing the L9 Plus, which I used for at least one month, I would pick up the Camon X over and over.

The Camon X is priced at a well deserved range, gives you value for your money. Over all, the Camon X is indeed a deceptively good Smartphone, meant for the masses.

I would have normally begin with Design but this time, lets start from the camera features. It might feel awkward but the Camon X is the actual and expected name for the Tecno Camon lineup after the launch of Camon C9 and Camon C9 Pro.

Tho, the newly introduced Smartphone camera might not be powered by AI (artificial intelligent) but that doesn’t mean, it can’t take cool selfies even at night, the handset is incredible powerful.

Basically, the phone is a selfie-centric phone. It still comes with other numerous features that you may find interesting and this keeps the phone outstanding among the best. Although, it is much smaller than the successor, the Camon X Pro with 24MP selfie snapper.

The front facing camera is enhanced with a dual brightness-adjustable selfie flash, where the flash light are meant to adjust simultaneously to give you a better shot. And other features includes Normal mode, Beauty, Panorama mode, Portaits mode, HDR.

Meanwhile, when taking selfie, I noticed the camera was able to jump in-between light, it tries to give you a more preferable-perfected shot. And yea, it comes with a bokeh-portrait mode, with this, the phone is able to bring out the subject and blur the rest unimportant background. Looks too good! You could take a look at the image above, don’t mind the big lips tho!

Surprisingly, the phone is able to shoot videos at 1080p up to 30ps. Thankfully, you can control the phone by setting the custom volume keys, Gridlines, shutter sound on / off, screen flash, mirror, selfie timer and many other stuff. We definitely understands this whole scenario and they works.

To the back (rear) camera, the phone is pretty the best too. It is enhanced to take bright awesome photos, the HDR, beauty mode, Panorama mode, there is the super pixels that does a pretty job for such device. And it is still able to shoot videos at 1080p up to 30ps.

The phone comes with Face ID, facial recognition. I was able to set everything, in accordance and well, it worked perfectly and not as strong as iPhone X but still vulnerable to other similar face tricks. My elder bro with couple of few years older than I, tried it out and yep, it unlocked it.

The Face Unlock feature is one disturbing security features on Android Smartphones. Well, it is the most affordable and delicate step to keep your device locked from strangers but not when it is being tricked with someone facial structures as yours.

Undoubtedly, it is not the first Smartphone to be tricked, even the mighty iPhone X has been gullible by other numerous vloggers and even ordinary users also. So, don’t feel they are not penetrable.

It is not a premium Smartphone with all-glass build design but the polycarbonate unibody design is expertly crafted, which is spectacular and impressive. Due to that fact, it is more slippery when handled with watery hands but slimmer, thinner and a slightly curved when holding it with dry hand.

When the Camon X mistakenly falls down, don’t worry, the costs of repairing it, isn’t as much as the case of other premium, high-end flagship, such as Samsung, OnePlus, Apple, Xiaomi and many others. But it doesn’t mean, you shouldn’t handle with care!

The phone arrives with Full screen display, that means, the top and bottom bezels are a little slimmer but still in-comparable to most mid-range phones. Tho, Tecno prophesies bezel-less display but those bezels are still huge and are meant to hold the LCD screen. While the top bezels houses the selfie shooter, flash light, light sensor and receiver. 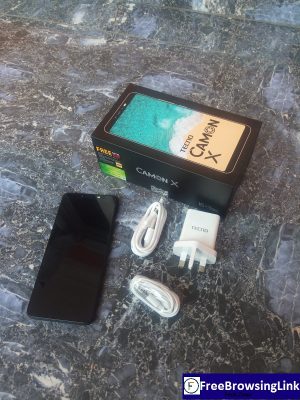 There is no physical home button but the bottom bezels are quite huge to feature that. With the disappearance of the home button, the fingerprint sensor scanner is still remaining in its normal place, the back rear side, under the camera lens ring flash with the company logo boldly encrypted on it.

The back cover is smooth and flexible. Under the hood, every other stuff is there. 3.5mm headphone jack, microphone, speaker, USB port while on the right hand side features the volume rocker, power off / on and the sim tray for micro sd card and sim card. Did I mention, the phone is light-weighted?

The Chinese company has unveiled several Smartphones with 18:9 aspect ratio Full Screen display, such as the Camon CM (being the first), then the Camon I and Camon I Air. Later on, we had the lower variants, which is the Camon I Sky. But right now, the Camon X and Camon X Pro is best among the Camon family.

On the screen display, the Camon X arrives with a tall 6-inch Full HD display with a mid-affordable screen resolution of 720 x 1440p, tho, it is incomparable to Smartphone with 1080p but the 720p comes with a sharp liquid coating, this makes the screen more brighter and sharper in image quality, producing a more satiable exposure.

The phone packs a 18:9 aspect ratio and not the slightly upgraded 19:9 aspect ratio but you still have the FullView Screen display. It is comfortable to handle, It features Eye care technology, this protects your eye from those colorful blue and white screen, that usually hurts the eyes.

There is the multi-window, with this feature, you could split screen easily by combining two compatible apps together. Comes with Do Not disturb, battery saver, screenshot.

While on the other hand, the phone features the one-hand mode. Without clicking on that button ‘One hand’ the phone is already programmed to be used with one hand but it still makes it more appreciated and easier!

The handset packs a comparable good and smart processor performance to keep the device running. It is powered by a MediaTek Helio P23 chipset running up to 2.0GHz x8 Octa-core processor. The processor keeps the device in a cool condition even after heavy usage.

There is 3GB of RAM and a Mali-T720 graphics processor, this helps you to play intensive and sophisticated games without receiving any crash report and switch apps without slowing or lapping. Well, it really does a pretty job anyways but of the 3GB RAM, the phone has used up to 1.25GB, so you are left with the remaining 1.25GB RAM for other stuff. 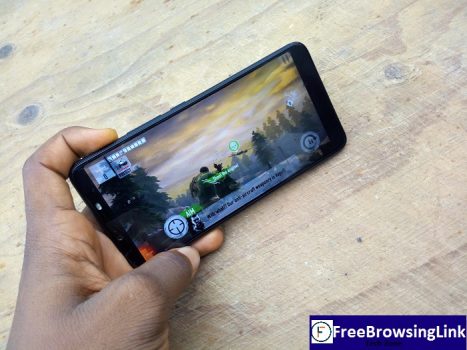 With the 1.25GB RAM, I played hard and demanding games such as Punch boxing and Bia3 and it was fast, smooth and opens way for multitasking. We all know how intensive this games are, especially the Bia3 with additional files. I opened youtube, email etc but not a single crash report was notified.

On the internal storage, the phone comes with a 16GB memory and it is expandable up to 128GB via micro sd card slot. Powering the device, you will be left with 6GB while the system used up to 10GB. And it runs on Android 8.1 Oreo with HiOS v3.3 on top, that is a bonus.

After running the Atutu-benchmark on the phone, it gives a surprisingly result of 85496 and that is way much bigger than the Note 4 with 45173. Everything was tested, providing an outstanding result performance. 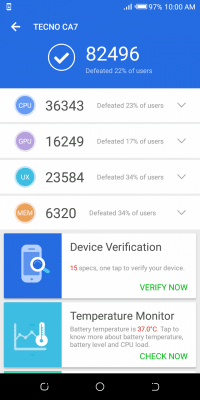 Fueled by a non-removable 3750mAh Li-Po battery capacity. The Camon X charges very fast with Tecno’s light speed charging technology and the device can charge 100% within 20mins and can lasts up to a day with heavy tasks but few days with a more lighter usage.

I decisively tested the battery life and it was awesome. With a battery capacity of 95%, I played demanding games, shoot up to 30mins of video, switched on cellular network (data), hotspot, launched different apps such as Facebook, Youtube, Mobdro, chrome browser, twitter and many others, everything under 3 hours and I was able to have 87% from the 95%.

The speaker is incredible loud, the fingerprint sensor scanner is mounted at the rear side and happens to be more faster and secured with the Face ID Unlock. There is other traditional security such passwords, pin, pattern, swipe unlock.

Am definitely concurring with Tecno, I would happily say that the Camon X is really a wonderful piece of fine art with solid and premium feeling! The Tecno Camon X CA7 Review is one of the best Android Smartphone to get right now in Nigeria, Kenya, Ghana, Africa, India and many other Africa and Asian countries!