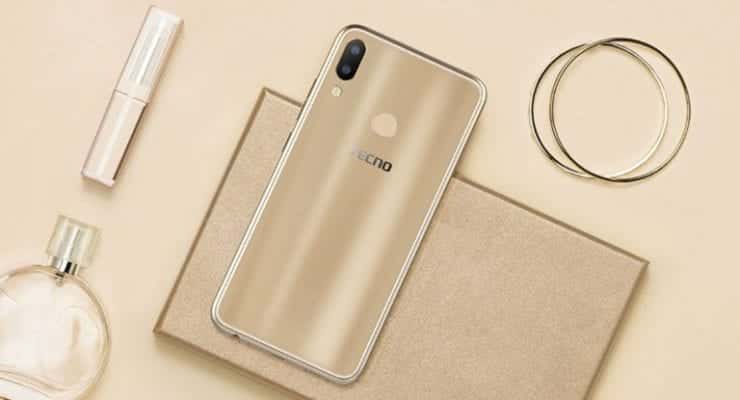 Also among the Camon AI series, Chinese brand, Tecno mobile launches the affordable Camon iAir2+ with quad-core processor and 2GB of RAM. The Tecno Camon iAir2 plus arrived with a notch display at the top, dual rear cameras and fingerprint sensor scanner under it.

The Tecno Camon iAir2 plus features an outstanding screen display, with ultra-thin bezels at the top and bottom. The design on the back, is much more equivalent to other recently launched Camon series.

The Tecno Camon iAir2 plus is meant to targets the budgeted Smartphone markets and with the mid-range specs on paper, the mobile device will definitely fly high in the economically-priced market.

Camon iAir2 plus is the successor to the Camon I Air mobile phone, both phones packs a lot of differences and similarities, which are notable. On the display aspect, the Camon iAir2+ features a larger and bigger 6.2” IPS LCD 19:9 display than the Camon I Air. New feature includes the presence of notch display at the top.

The handset comes with 32GB of internal storage, which can be expanded up to 128GB via a microSD card. The Tecno Camon iAir2+ packs a dual camera setup at the back, consisting of 13-megapixel (f/1.8) + 2-megapixel primary camera on the rear and a 8-megapixel front shooter for selfies.

Under the hood, the phone is powered by a 3750mAh battery capacity, supports dual SIM mode. Thankfully, the phone is enhanced with security combination of Face unlock and Fingerprint sensor.

The price of the Tecno Camon iAir2 plus is Rs.8,999, which is around N44,000 in Nigeria currency. The phone was exclusively announced and launched in India, if the phone will later be available outside the country remains a myths.