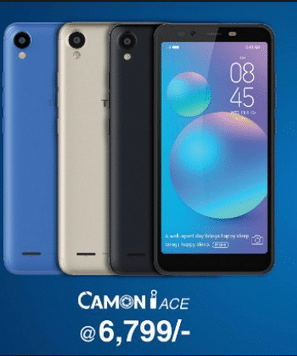 This is the latest Tecno Camon iAce Android Smartphone. The mobile phone was launched hand-in-hand with other device, it is the Camon I Sky 2. The Camon iAce is powered by HiOS based on Android 8.1 Oreo and 13MP rear Camera with dual LED flash.

The Tecno Camon iAce Smartphone was unveiled in India with amazing specifications and features. The Hong-Kong based company showed a piece of classic workmanship with the mid-ranger. Anyways, the phone is enhanced with Fingerprint sensor and Face ID Unlock feature.

Anyways, the Tecno Camon iAce front and back camera has support for AI features. And also, the front facing camera doubles as the Face ID Unlock security feature, where your Face serves as your security for your phone.

Although, the phone comes with 18:9 aspect ratio but the bezels on the top and bottom are much, unlike other high-end mid-range devices. It is kind of compromised for its affordability.

The wide Fulview screen display is equally okay for watching videos, playing games. While the MediaTek processor and 2GB RAM will help optimizes the 3050mAh battery capacity, allow the device to run various apps at once. Hence, creating 100% multitasking.

There is 16GB of internal storage, where you can store multiple applications, movies, games, musics and documents, but it is still expandable up to 128GB via micro SD card slot. The Tecno Camon iAce is available in four major colors, Champagne Gold, Midnight Black and Midnight Blue.

The price of the Tecno Camon iAce is around Rs 6,799, which is under $100. Approximately, the fine handset price is $98 per unit. At first, Tecno mobile targets the India markets with wide-range of affordable Smartphones.