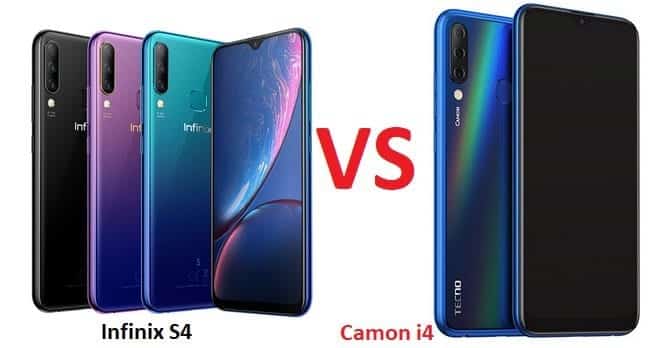 The Tecno Camon i4 vs Infinix S4 is the latest Android Smartphones from the both companies to feature outstanding and unique features and design.

Definitely, the Infinix S4 handset is an awesome piece of Smartphone with impressive design, a conspicuous 32-megapixels selfie snapper.

While on the other hand, the Tecno Camon i4 is nothing short of the Infinix S4. Although, there are little differences and similarities.

For references, the Tecno Camon i4 is the direct successor to the Camon i3, and might launch as another variant in the Nigerian market.

Meanwhile, the Infinix S4 is the 2019 advanced successor to the amazing Infinix S3X, with wide notch display. 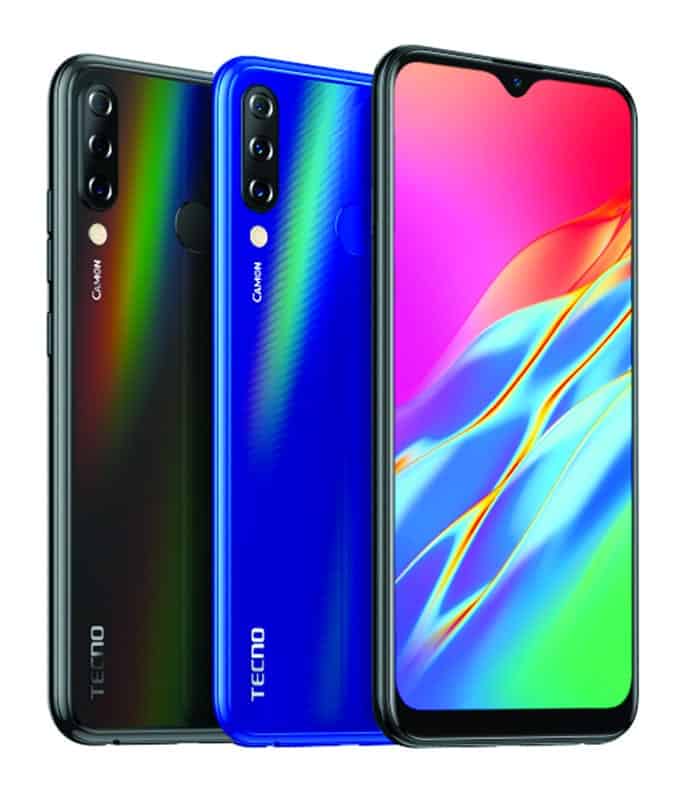 The Tecno Camon i4 and the Infinix S4 both arrives with a 6.20-inch 720p 19:9 269ppi, IPS LCD capacitive touchscreen display, which is confidently awesome to the taste.

Both phones arrives with the same trendy water-drop, dewdrop notch display at the up front, which houses a single front facing selfie snapper. While Tecno is calling it ‘Dot Notch Display’

That explains the reduced bezels, and borders surrounding the screen display. The both Smartphones also boasts of 88.6% screen-to-body ratio and a chin stays at the bottom.

Both the Camon i4 and Infinix S4 supports a triple rear camera, which includes the main 13-megapixel primary camera with an f/1.8 aperture, a second 8-megapixel camera and a 2-megapixel camera.

Where the 13MP acts as the primary lens, while the 8MP as the wide-angle lens and the 2MP as the in-depth sensor, for portrait mode.

The cameras are aligned vertically on the back of the phones, and they both support Artificial Intelligence, AI. For smarter photo shots.

The Infinix S4 arrives in two model, while the Camon i4 in three variant, and 3GB RAM and 32GB/64GB of internal storage happens to be one of them.

While the Camon i4 runs on the company’s HIOS v4.6 and the Infinix S4 on XOS 5.0 Cheetah both are based on the latest Android 9 Pie OS.

A rear-mounted fingerprint sensor is available on the both phones, and another biometric feature, which is the Face ID recognition.

One of the major differences is the selfie snapper, while the Tecno Camon i4 comes with 16-megapixel camera lens, and the Infinix S4 with 32-megapixels f/2.0 aperture.

The front facing selfie snappers are both held straight in the water-drop notch display, which is also known as dot notch design display.

Tecno Camon i4 is powered by a 2GHz Quad-core Meditek Helio A22 (MT6761), while the Infinix S4 with Octa-core MediaTek MT6762 Helio P22 SoC processor.

Infinix S4 is available in 3GB/6GB RAM while the Tecno Camon i4 comes with 2GB/3GB/4GB of RAM. This will provide improved and faster performance.