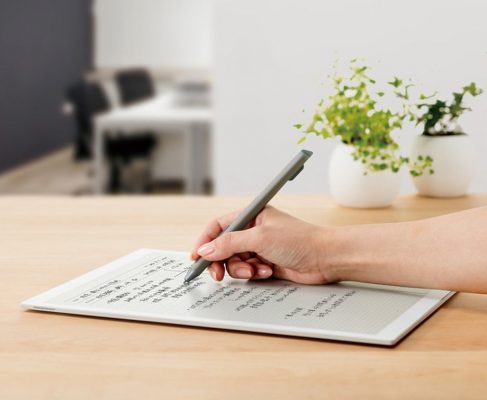 If you really don’t like the idea of using paper sheet to take down some important and valuable notes, then you must have a lot of currency to spend for the Sony DPT-RP1 digital paper tablet, although, when carrying the device, Sony noted that, it weighs as a stack of 30 pages of paper.

Sony introduced the paper tablet for customers, who wouldn’t love to make use of ordinary paper to store incredible vast amount of information and knowledge, but it isn’t affordable, it is priced at $700 per paper tablet.

On the display, the device comes with a 13.3-inch display and high 1650 x 2200 screen resolution. To allow more accuracy for users to experience more virtual display and to elucidate few notes on the screen, the table features non-slip panel with the included digital pen.

On the inside, the company made a new Digital Paper App for desktop, this allows you to convert websites and documents to PDF form and send them wirelessly to the DPT-RP1.

As already said, the paper digital tablet costs $700 and notably, Sony DPT-RP1 is particularly made for businesses and other professional value.