The messaging app, Snapchat introduces an in-app alternative to both TikTok and Reels, it is the Snapchat Spotlight and it is expected to pay creators for their snaps, thereby, earning creators more money.

It is popularly know that both pictures and messages are only available and accessible to recipents for a short time on Snapchat, but the new Snapchat’s Spotlight is bringing some game changer.

Snapchat Spotlight will take on TikTok and Instagram’s Reels. Although, these companies took great time before announcing payment process for its creator, Snapchat says Spotlight will pay a share fee to creators who share the most popular clips.

For next remaining days of the year, TikTok says the company will set aside a money pool of $1million for creators with the most popular clips and each $1million is for every day.

Although, Snapchat isn’t planning on paying all creators who just uploaded a video, your video pressumably will be determined based on the total number of unique video views a Snap gets in a given day. 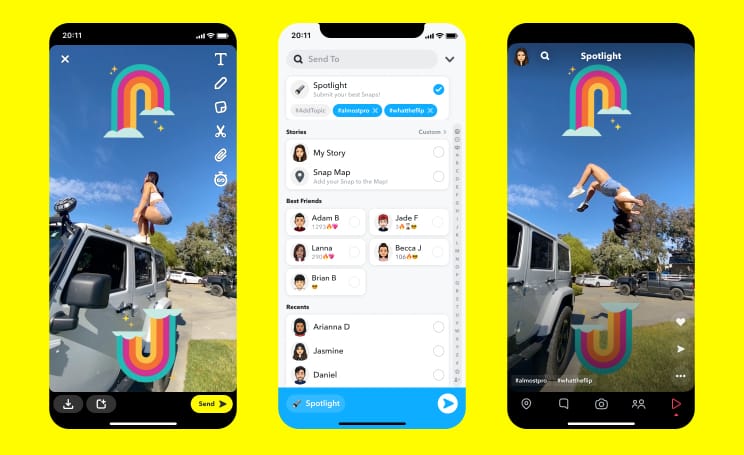 That means, if you are a creator and your video assumably goes viral, you’d take a large part of the $1million. Note that it doesn’t really matter if your subscr based on numbers of subscribers, but totally on the virality of your video.

So the amount people receive is primarily based on unique views compared to other snaps that day. Users can continue to earn from their video if it’s popular for multiple days at a time.

Currently, Snapchat will definitely get more users using its new in-app called Spotlight. Although, Snapchat said it will not allow watermarked content on the platform, this will ensure that the videos are unique to the platform and not reuploads from other similar platforms.

The no watermarked contents is totally important, as creators might redownload its viral videos from Reels or TikTok and reupload it on Spotlights platform. If this is allowed, Snapchat’s Spotlight will be filled with series of already seen popular videos.

Snapchat’s Spotlight in-app app is more like Reels and TikTok, offering up to 60-seconds long vertical videos auto-playing. Users can skip through content by swiping up or down. Snapchat will likely introduce advertisements to support the feature later on.

The in-app Spotlight will gets its own dedicated tab in the app and there is an added features to make it lively and secured. Since it is up to 60 seconds long, Snap says it’s made specific decisions based on its user base.

Security wise, public comments are being completely disabled for all snaps and if a creator does not have a public account, instead has a private account, their username or handle will not be visible publicly.

Anyone can submit a snap, just tap Spotlight when posting to ensure it populates the section. Based on what you’ve viewed in the past and how long you’ve watched, Snapchat’s algorithm will display Snaps that they think you may enjoy.

As already accounted for, Spotlight is specifically designed for viral video formats but it still lacks Snaps feed and Snapchats now allows users to submit their snaps in Snap Map. It’ll be uploaded as part of a location for anyone to feel what’s happening in a given place at any moment.

Snapchat mentioned that Spotlight will launch in 11 countries as an in-app with its own dedicated tab, including the US, Canada, Australia, New Zealand, the UK, Ireland, Norway, Sweden, Denmark, Germany, and France first, with more countries to follow soon.