Snapchat is making it easier for their users to create and customized more interesting and amazing photos filters via their Lens studio, where they announced seven new templates.

Snapchat users are getting more from the company with the new template’s launch. And Giphy integration is also attached to the lenses, that is a different from the first ability to insert Giphy’s library of animated GIFs into snaps.

More than 30,000 lenses were created in the first two months, Snap says, earning more than 1 billion views. “We’re blown away by the participation, the level of engagement, and the type of creativity that has happened,” said Eitan Pilipski, who runs the camera platform at Snap, in an interview. 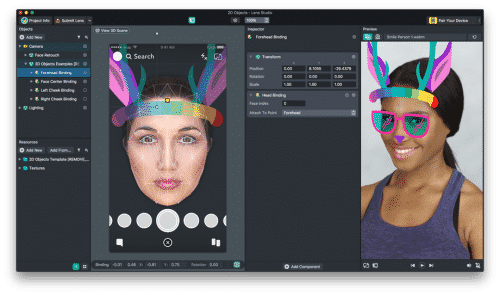 How does this works; TheVerge who spoke to a beta tester confirmed that the studio lets creators build simple face filters in as little as five minutes. The user will upload the photo, then the company will generates a Snapcode and deep link that, when tapped, opens it within Snapchat for 24 hours.

The code itself remains live for a year after it’s created, so you can unlock it multiple times. You can send the code to friends with a couple taps, whether you created it yourself or received it from someone else.