This is bad actually! But according to the inspirational words “Everything has a bad side and a good side, everything has a Bad Advantage and a Good advantage”

Well, twitter is place for jokes and for seriousness but the school teacher was actually joking and the school authority took it as a insult from her and decided to punish her by sending her a letter of retirement!

And yea, the Americans aren’t happy with it. They decided to create a petition demanding Nash gets back her job. Not only that, her termination has also sparked the hashtag #katiefromFCPS on twitter. Now lets take a look at the story and what the student and teacher said!

A student named Nathan twitted on his twitter handle “@FCPSMaryland close school tammarow PLEASE” and of course looking at the spellings, even a little child would know that he made a Huge mistake but the teacher decided to Joke with him.

The teacher, Katie Nash is an employee of Frederick County Public Schools in Maryland who is also responsible for handling the FCPS’s Twitter account.

So in a kidding format, she responded to him with the official twitter handle because it is also her job, “But then how would you learn how to spell ‘tomorrow?’ :)” Of which, she took it to heart to respond. 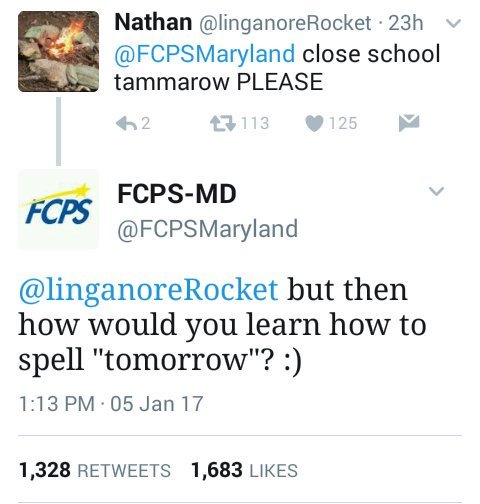 Following feedback from students suggesting the schools’ tweeting tone came across a tad too dry, Nash “took it to heart” to spice things up and engage with the pupils in a fun way.

The social media is a separate world indeed, the tweet quickly garnered the attention of fellow students, accumulating over 1,000 retweets and 1,400 likes, administration found it inappropriate and asked Nash to delete it shortly after.

According to the former FCPS web coordinator, the student was not offended by the tweet and didn’t mind it at all. FCPS director of communications Michael Doerrer has since confirmed Nash is indeed no longer an employee of the school.

In conclusion, the FCPS doesn’t have the right to fire Katie Nash because of this answer. And after all, it was a Joke in disguise! It was in appropriate, students didn’t find it annoying, instead they found it hilarious and the school failed to understand that Education and fun should go hand-in-hand!

She has to be FREED! She has to return! It wasn’t annoying! The students in question didn’t find it annoying! He didn’t even report then why the sack? The school was annoying themselves and they are pathetic!