Samsung announces a new external SSD with an in-built fingerprint reader, it is the Samsung SSD T7 Touch. It is still true that the South Korean tech giant makes one of the best external SSDs.

And the features of advanced external SSDs always come into adding more storage and making the drives much faster. Well, Samsung decided to add those and be more creative with other things.

Thanks to the improved transfer feed, offering up to 1,050 MB/s transfer speed. The new Samsung’s SSD T7 is twice as fast as its predecessor, the T5.

But it was officially announced at CES 2020 with a built-in fingerprint reader to secure your file and AES 256-bit hardware encryption and improved transfer feed. 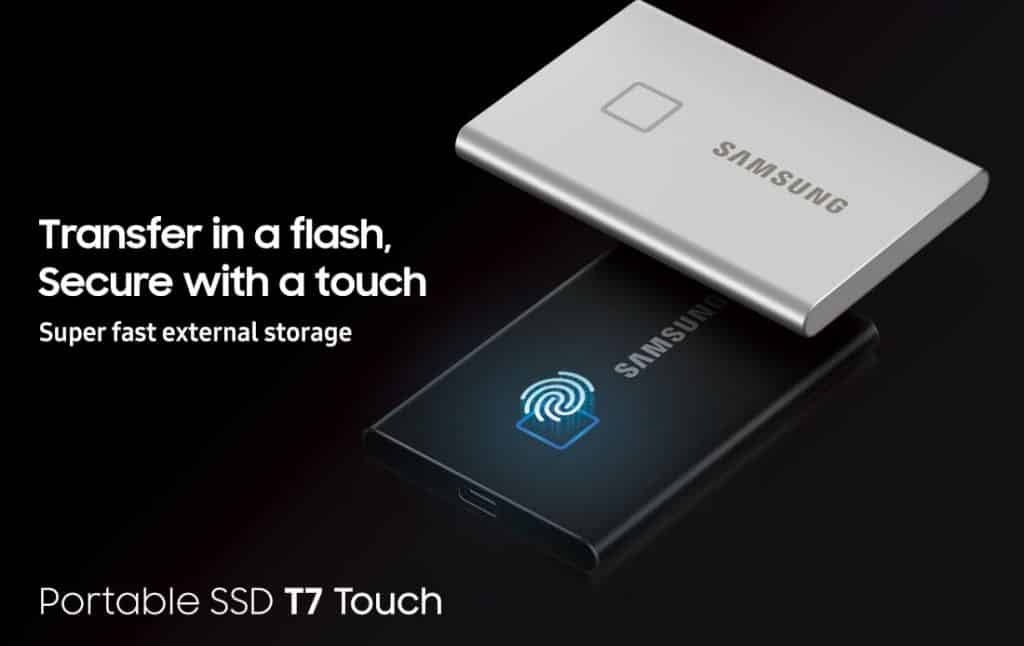 Samsung SSD T7 is a portable Solid State Drive Touch with a sleek, compact design based on the USB 3.2 Gen 2 standard. It weighs just 58 grams.

It comes with a feature called ‘Motion LED’, which allows you to glance at the device and determine the status quickly. Much like an indicator light that shows when the drive is plugged in and actively transmitting data.

The design isn’t everything here, Samsung is offering the device in 500GB, 1TB and 2TB capacity. It supports a single USB-C port, which can be connected to either a USB-C to USB-C or USB-C to USB-A cable.

Samsung noted that another version of the SSD T7 Touch without a fingerprint reader is set to be released in Q2 2020 as T7. Anyways, the company has launched the phone in India with a starting price of Rs. 11,999.