And there is the Samsung Galaxy S10e Android powered Smartphone that arrives with a smaller 5.8-inch full-HD+ Flat Dynamic AMOLED Infinity-O Display, and 6GB / 8GB of RAM.

It features smaller specs, and features than others. And it is available in two different variant / model, there is the 6GB RAM and 8GB RAM option.

The Galaxy S10e is the lower-cost Smartphone in the series, and packs a lot of exclusive specs and features. And arrives with side-fingerprint sensor scanner. 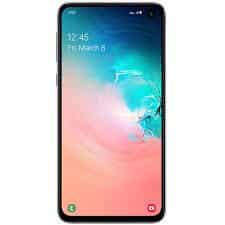 The “Dynamic AMOLED Infinity-O display” is also available on all the Galaxy S10 series. That means, the S10e considered a little bit among the series.

Samsung’s Galaxy S10, Galaxy S10 Plus. S10 5G and S10e are the world first phone with HDR10+ certified displays with a peak brightness of 1,200 nits. The displays are touted to have blue light reduction features, apart from improved colour accuracy, and outdoor visibility.

Well, for the biometric sensor, the Galaxy S10e did not arrive with the trending Ultrasonic fingerprint, that built straight into the display in the likes of S10, S10+ and S10 5G.

But the Samsung Galaxy S10e comes sports a side-fingerprint sensor on the home button. And the company boasts that the model offers a “premium experience in a compact size.”

It also comes with IP68 water protection and can wirelessly charge other devices. These are premium specs for the Galaxy S10e.

If you actually need a smaller Smartphone, then the Samsung Galaxy S10e should be number one on your list. But the other way round.

The Samsung Galaxy S10e rear setup is totally different from the Galaxy S10 and Galaxy S10+. Where you’ll find a dual-rear camera instead of the S10 series triple cameras at the back.

At the back, sits a 12-megapixel wide-angle camera and a 16-megapixel ultra-wide lens with a 123-degree field of view.

While the hole-punch at the front houses a 10-megapixel sensor couple with 2PD autofocus, an f/1.9 aperture, and 80-degree lens.

Samsung boasted that the Galaxy S10e uses the “Neural Processing Unit” that automatically change certain camera settings for the better in real time. The sensors, network and connectivity aren’t different from the Galaxy S10 series.

The Samsung Galaxy S10e is powered by a Qualcomm Snapdragon 855 and runs on the latest Android 9 Pie with Samsung’s One UI custom experience.

As already mentioned above, it’ll be available in two models, 6GB RAM and 8GB RAM options. And 128GB and 256GB internal storage.

It is is fueled by a 3,100mAh battery capacity, support Fast charging too, and it is able to charge other Qi enabled Smartphone wirelessly, by placing the phone at the back.

The Galaxy S10E is available for preorder on February 21st and will ship on March 8th. And the starting price of the Galaxy S10e is $749.99, which is just $150 less than the full S10. This is not encouraging at all.