The newly announced mobile phone comes in two different variant, there is the 4GB RAM and 6GB RAM. Samsung’s M series began with the M10 and M20 phones.

The Galaxy M30 comes with a colorful plastic design, that seems too good for a mid-range Smartphone but also comes with a matte finish.

Like most of the Samsung phones out there, they are also using the Infinity-U on the Galaxy M30, which houses only the front-facing camera sensor.

It sports a tall 6.38-inch full-HD+ Super AMOLED Infinity-U Display with 19.5:9 aspect ratio. The Samsung’s Infinity U looks much like a waterdrop-shaped notch.

For the optics of the phone, it comes with a respectable triple camera at the back, and a single front facing camera lens for taking cool selfie shots.

While the Infinity-U notch display holds a front-facing 16-megapixel sensor with f/2.0 aperture. And it comes with support for selfie focus.

You can find the regular, and normal network and connectivity features on board, which includes 4G LTE, dual-SIM (Nano+Nano), WiFi, Bluetooth v4.2, etc.

The Galaxy M30 Android Smartphone is powered by a Octa-core Exynos 7904 processor, which delivers cool batter optimization and faster performance.

Arrives in two different models, there is the 4GB RAM and 6GB of LPDDR4x RAM, multitasking and switching of apps will definitely increase rapidly.

However, the both models are congratulated by a 128GB of internal storage, and fortunately, it is expandable up to 512GB via micro SD card slot.

The Samsung Galaxy M30 comes with Widevine L1 certification, which means users can stream HD content from services such as Netflix and Amazon Prime videos.

Galaxy M30 runs on a quaint Android 8.1 Oreo out of the box, with the company’s Experience v9.5 on top. Nevertheless, the company promises Android 9 Pie roll out sooner. 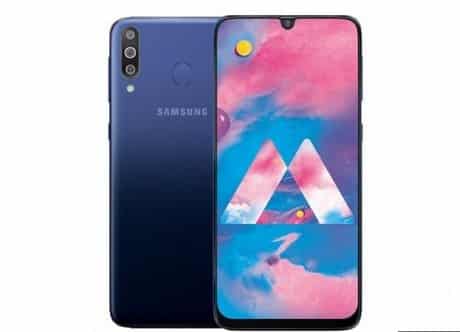 The newly announced device comes with two biometric feature, there is the Face ID Unlock and rear-mounted fingerprint sensor scanner.

And it is fully supported by a large and gigantic 5,000mAh battery support, which arrives with fast charging support with a 15W charger.

The company, Samsung fully claims that the Galaxy M30 will last up to a full day and can be topped up at thrice the speed compared to a 5W charger via the USB Type-C port.

However, the both models of the Samsung Galaxy M30 will be available from the Samsung e-shop and Amazon.in at 12pm IST (Noon) on March 7.