Galaxy M10 is slightly smaller in screen display, and quite different from the Galaxy M20 Smartphone. The similarities are also incredible.

The phone was officially launched in India, and you can start ordering sooner or later. Anyways, this is Samsung’s answer to the Xiaomi’s India Market Reign. 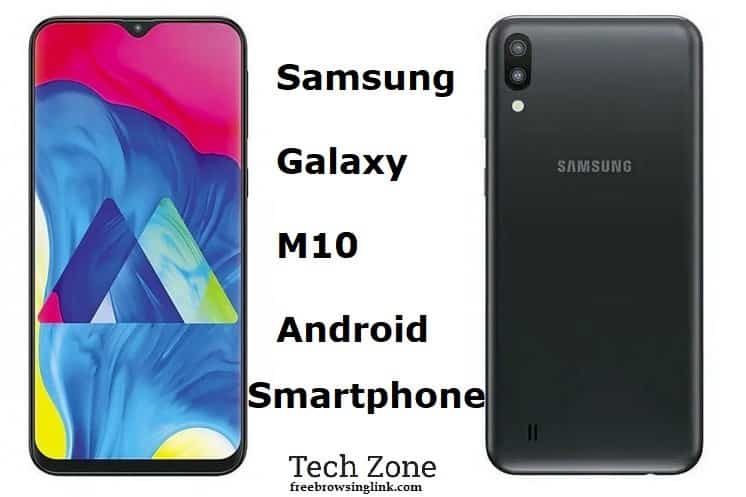 The Samsung Galaxy M10 comes with amazing cutting-edge design, and the corners are rounded. While the bezels surrounding the screen is slimmer and narrower.

For screen display, you can find a 6.2-inch HD+ LCD (720×1520 pixels) Infinity-V Display panel, also known as water-drop notch display along with an 19:9 aspect ratio.

It also boasts of an incredible 90% screen-to-body ratio. Which is the same with the Galaxy M20 Smartphone.

It is available in Charcoal Black and Ocean Blue color options. And you can NOT find the fingerprint sensor scanner at the back, but there is a vertical dual camera lens.

The optics of the phone cannot be compared to the Galaxy M20 Android Smartphones. But you can still find the same back dual camera and single selfie lens.

At the back, you’ll find the dual rear camera that consists of primary 13-megapixel sensor with f/1.9 aperture and a secondary 5-megapixel ultra-wide sensor.

While for the selfies, there is the 5-megapixel sensor and has an ultra-wide mode to support landscapes, cityscapes, and group photos.

It is also available in two different models, there is the 2GB and 3GB RAM. It is purely for multitasking, and smarter switching of apps.

Sports 16GB and 32GB of internal storage options, and they are fortunately expandable up to 512GB via microSD card. You can store more music, movies, apps, games and other files.

It runs on Android 8.1 Oreo OS based on Samsung Experience 9.5 UX.

It comes with a 3,400mAh battery capacity, which support 15W charger, and it can be powered up by a Micro USB port connectivity. Promises more battery efficiency.

And you can purchase the Galaxy Android Smartphone from either Amazon India or Samsung stores in India. It is just a budget friendly Smartphone that want Samsung to earn some popularity!