Samsung Galaxy M1O and Galaxy M20 were officially launched in India, and they both arrived with similar design but there are other differences in specs.

Samsung mobile wants to win back India market once again, and introducing budgeted Android Smartphone into India’s market will definitely propel them forward.

In 2017, Samsung was leading the India markets, but Xiaomi arrived, took over and hold that title throughout 2018. Samsung planned on coming back for India market.

The new Galaxy M phones are marketed as “India-first” smartphones and targeted to the millennials. The both Smartphones can be purchased starting from 5th of February.

Both the phones sport dual rear camera setups stacked vertically, volume and power buttons on the right edge, and a 3.5mm audio jack port on the bottom edge.

Apart from that, the both phones also runs on the same Android 8.1 Oreo based on the company’s Experience 9.5 UX skin. Which has newer features.

They also arrive with the same slim bezels at the top and bottom, and both boasts of 90% screen-to-body ratio, which is kind huge for a budget-friendly phones.

Colors isn’t a huge difference between the mobile handset, both comes with Charcoal Black and Ocean Blue color options.

At the back, you will not just find the dual camera sensor, but the same camera lens, 13-megapixel sensor and a secondary 5-megapixel ultra-wide sensor.

Another major similarities is the availability of Face ID Unlock. Which allows you to use your Face as your password for biometric security.

The two phones come with three-slot SIM tray, with two slots for Nano SIM cards and a dedicated microSD slot for memory expansion.

Another slightly differences is the screen resolution, the Galaxy M10 comes with 720×1520 pixels, while the Galaxy M20 arrives with with 1080×2340 pixels.

Apart from that, the major and key differences is the lack of Fingerprint sensor on the Galaxy M10 and the availability of one on the Galaxy M20 Smartphone.

Connectivity brings a major play here, you will find the Galaxy M10 with a Micro-USB port, while the Galaxy M20 comes with USB Type-C port.

Processor is quite different, the Samsung Galaxy M10 is completely powered by an Exynos 7870 SoC, while the Galaxy M20 with Exynos 7904 SoC.

But the Samsung Galaxy M20 comes with bigger 3GB RAM + 32GB storage and 4GB RAM + 64GB storage options. And you can easily be expanded up to 512GB via microSD card slot.

But the Galaxy M10 comes with a smaller 3400mAh battery capacity, that charges via a Micro USB port. But both phones has incredible battery life span. 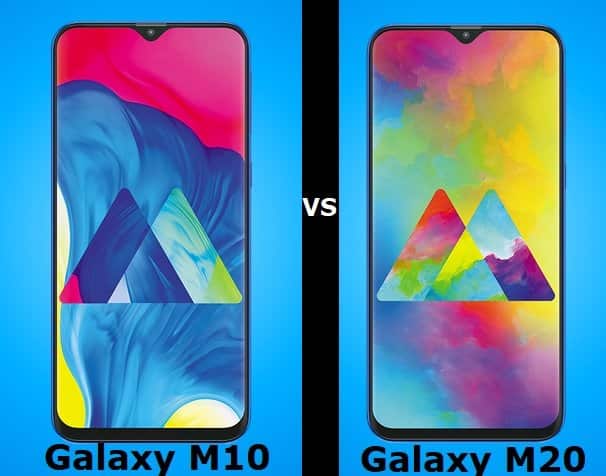 The both phones can be purchased with on Amazon India, or Samsung’s India Store. You can start ordering the Smartphone from February 5th.