However, they are bunch of other similar specs anyways, the phone still run on Android GO operating system, Android 8.1 Oreo version of Android Go. Meanwhile, you will find other differentiation of specs, such as bigger screen display, larger battery capacity, and increase storage.

They have been bunch of other leaked specs, features and it was recently rumored but is now formally listed with all its key specifications. Anyways, when gazing straight to the Galaxy J4 Core mobile phone, you will still find those humdrum feeling.

It sports a 6-inch HD+ TFT LCD panel display, with a moderate and normal screen resolution of 720×1480 pixels. Those awful bezels are still loitering around the screen display of the Smartphone, top, bottom, and sides.

Well, undoubtedly, the display of the Galaxy J4 Core, and the screen resolution is much more bigger and larger than the first generation, Galaxy J2 Core, with 5” TFT QHD 960 x 540 LCD screen but there is the LCD screen display too. The phone is available in different colors 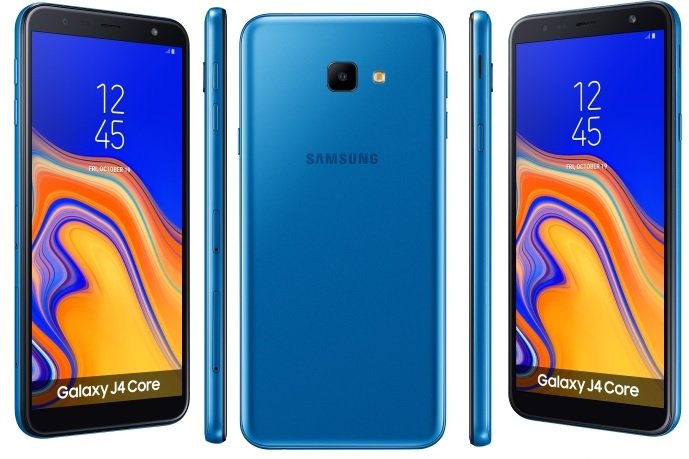 The cameras aren’t different from the Galaxy J2 Core. Thankfully, the front and back are supported by a LED flash, this will help capture shots in a dark environment. The apertures of the both cameras aren’t big or much, but it is a little bit compromised, in order to stay in the budgeted markets.

The newly announced handset is powered by a Quad-core SoC clocked at 1.4GHz, coupled with the same Galaxy J2 Core 1GB RAM. This will allow for more faster, and smarter phone performance, multitasking and many more.

But the 16GB internal storage is quite different, and bigger from the Galaxy J2 Core’s 8GB of in-built storage, but thanks to heaven, if you want more storage options, you can easily expand your storage up to 512GB via a dedicated microSD card slot.

There is the sensors also, which includes Accelerometer and a proximity sensor, but lacks a fingerprint sensor scanner, front or back. Under the hood, the Android GO handset is fueled by a 3,300mAh battery capacity. The phone runs on Android 8.1 Oreo (Go Edition), and not the latest Android 9.0 Pie (GO Edition).

Virtually, all the techies knows the whole point of Android Go, it is designed to work well on less-powerful devices. For the Samsung Galaxy J4 Core pricing and availability, the company has failed to utter any word. But we are actually looking at a short period of time range, before we could start arriving in stores.