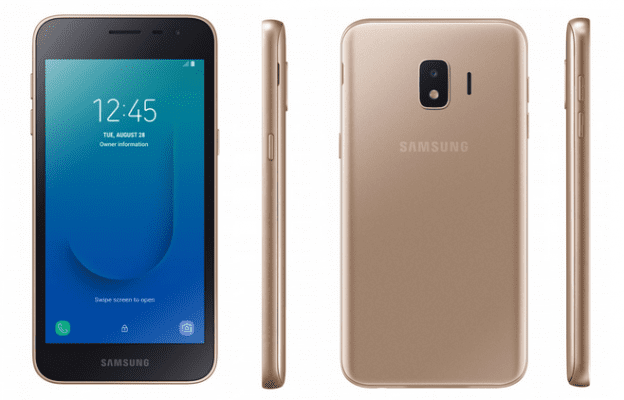 As we all know, Samsung mobile is currently holding the biggest share in India’s Smartphone market, and keep being the leader, they have launched the Galaxy J2 Core and it is available in India and Malaysia market.

The new Smartphone was recently leaked and well, the leaks showed a comprehensive handful of specs. But right now, the Android device is officially announced and even available for pre-order, starting from today.

Being a budgeted Smartphone, the device comes with huge bezels around the screen, top and bottom. But the company decided to remove the physical home button, -after all, companies are removing it. Instead, you’ll see the company’s logo.

Featuring a smaller screen display of 5’inches, with an TFT screen and it comes with Go Edition’s Ultra Data Saving feature, a very portable feature.

The camera of the phone is quite boring and humdrum, packs 8MP rear camera and 5MP selfie camera on the front (both have f/2.2 aperture).

The Smartphone might not boasts of amazing camera qualities but it is enhanced with beauty Mode for better portraits and selfies. It comes with LTE connectivity (Cat. 4 150Mbps), Wi-Fi 802.11 b/g/n (2.4GHz), Bluetooth v 4.2, USB 2.0, GPS, Glonass, BeiDou.

It brings 1GB of RAM and 8GB of internal storage to the table. However, it is expandable via micro SD card slot.

Everything on the phone is powered by Exynos 7570 chipset – a 14nm part with four 1.4GHz Cortex-A53 cores and Mali-T720 MP1 GPU to handle the graphic processor performance. And also, comes with 2600mAh battery life.

Meanwhile, the phone lacks any form of biometric security feature but comes with Accelerometer, Proximity sensors. The new Smartphone runs on Android Oreo (Go Edition). As we all know, it brings the best of Android to the rapidly growing market for low-memory devices around the world, including your apps and games.

Although, the Android GO has been invoke for many months now but we are all gearing up for the next Android 9 Pie (Go Edition), and it is coming.

However, the Galaxy J2 Core is available in India, Nigeria and Malaysia markets starting from today, and will later expand to other markets. The price is around $100 outside Nigeria, and N34,000 in Nigeria currency.