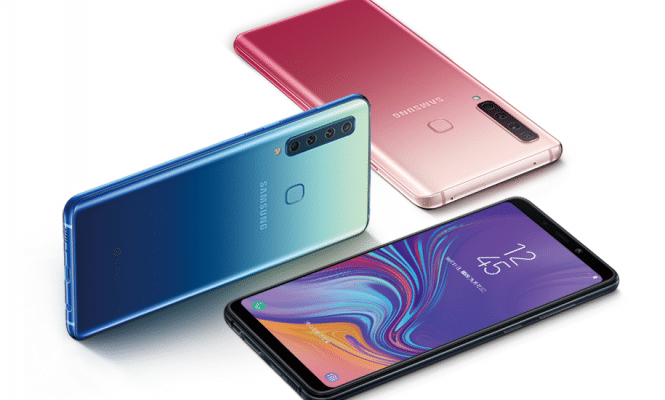 Samsung Galaxy A9s was also launched in China alongside Galaxy A6s mobile devices. Samsung Electronics is looking forward to competing rigorously with competitors in China. After all, they are leading in India, why leave China!

Galaxy A9s is a Chinese version of the Samsung Galaxy A9 (2018), which is the world first Smartphone with quad-camera. And the A9s isn’t lacking behind, there is still that unique camera features but still a mid-range Smartphone.

Huawei and Xiaomi are the top competitors in China, and Samsung wants to be among the top notch in the competitions. With less than 1 percent of the share in the Chinese market, they want to boost their Smartphone sales, especially with ODM companies.

Opening the box, you are greeted by a 6.3-inch Full-HD+ Super AMOLED Infinity display, and it is powered by a Snapdragon 660 octa-core chipset coupled with 6GB of RAM. Which will provides uncompromising fast performance and multitasking.

The specs still remains the same on the Galaxy A9s, four cameras lens at the back. A 24MP primary sensor, an ultra-wide 8MP lens, a 10MP telephoto lens for 2x zoom, and a 5MP depth sensor for Live Focus shots. While the front holds a 24-megapixel camera.

It features a 128GB of internal storage, and it is expandable up to 512GB via micro SD card slot. Fueled by a 3800mAh battery capacity with fast charging support. Comes with fingerprint sensor and Face unlock feature, it is priced at CNY 3,500 / $505.

Few blogs and Chinese customers were afraid that Samsung will eventually pack-up and stop manufacturing Galaxy phones for China. But Samsung electronics is still pushing forward to becoming one of the greatest assets in China.

“A very few models could be (produced via) ODM orders, but Samsung is more likely to maintain its manufacturing-driven position in the market,” he said.

“Samsung is trying to regain Chinese consumers’ trust by listening to their needs and reflecting (their wishes in) our products’ design, sales and marketing plans,” Koh said in a speech at the launching ceremony for the Galaxy Note 9 in China in August.