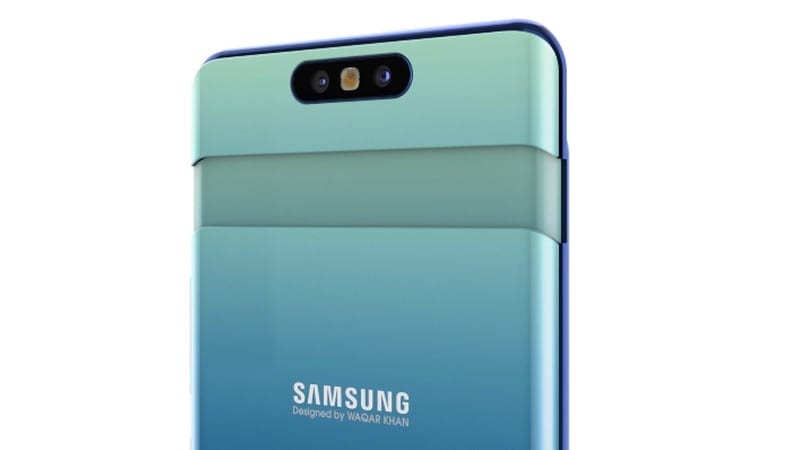 Samsung Galaxy A90 is another upcoming mid-range Smartphone that is rumored to sports a unique slide-out design that will have the cameras housed in a rotating module.

Well, Samsung isn’t the first company to ditch the first intrusive notch display, with mind-blowing method. But Oppo Reno is about to launch a new phone with an unprecedented notch display.

While Samsung Galaxy A90 will feature a pop-up rotating camera, and it can be used as a regular rear camera or the selfie snapper. Anyways, we’ve to see this to know the awesomeness.

On the other hand, Oppo Reno notch display looks like the pop-up eyebrow camera, which allows a speaker and front-facing flash. And none of this disturbs the bezels of the phone.

Unlike the Oppo Reno’s upcoming phone with no specs, the Galaxy A90 device has some rumored specifications and features, and it might be powered by the Qualcomm Snapdragon 7150 SoC.

The rotatory camera will reportedly allow the device to adopt a design without a notch or a hole punch, or as some leaks call it, the New Infinity Display. Talking about the display, it is tipped to be a 6.-7-inch Full-HD+ OLED panel with a resolution of 1080×2240 pixels.

Like the Huawei P30 Pro and the LG G8 ThinQ Smartphone, the screen is rumored to arrive with a vibrating technology that will allow it to produce sound – an electromagnetic levitation speaker in technical terms – eliminating the need of an earpiece.

Galaxy A90 is fueled by a 3,700mAh battery capacity with support for 25W PD fast charging. The device is also said to sports an in-display fingerprint sensor scanner. The Galaxy A90 is expected to launch on April 10 and will weigh 219 grams and measure 76.5 x 165.0 x 9.0mm.