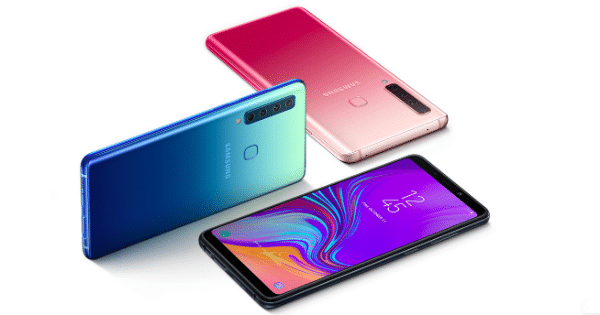 2018 did not only mark the beginning of a new era for flagship phones – premium all-glass build but also a world of plentiful and superfluous cameras lenses. This is the Samsung Galaxy A9 (2018) with four rear cameras and a single 24-megapixels front-facing camera.

The Samsung Galaxy A9 (2018) now owns the crown of being the world’s first Smartphone with quad (four) camera sensors on its back. The South Korean Giant, Samsung mobile is looking forward to keeping its A-series in the budgeted markets, and four cameras might help, they suggested.

Samsung Galaxy A9 (2018) isn’t just the first Smartphone to come with four rear camera, but also followed LG as the second company to bring in a five camera phone to the table for comparison. The LG V40 ThinQ is among the major series of Smartphones out there to break a camera-phone record, featuring triple rear camera and two front-facing selfie snapper.

While the world first Smartphone with triple camera, was the flashy, shiny and flawless Huawei P20 Pro, with dauntless feature. Recall, that the Samsung Galaxy A7 (2018) was launched with triple camera. Well, Samsung wants to keep on the leading the Smartphone budgeted markets in India. 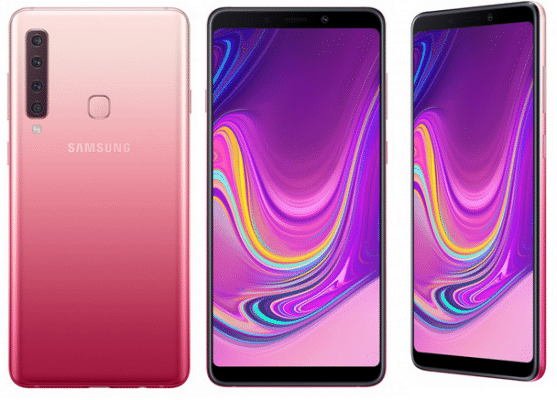 The Galaxy A9 (2018) is the successor to the 2015 Galaxy A9. And it is available in three elegant color options, Caviar Black, Lemonade Blue and Bubblegum Pink. Like P20 Pro gradient color mixture, the Galaxy A9 (2018) comes with the color combination at the bottom-back, which changes from pink, blue, black to a lighter hue of those colors at the top.

Apart from the four camera sitting vertically with LED Flash, opposite is the rear-mounted fingerprint sensor scanner. It is the company’s mid-range Smartphone but it still comes with always-on display and fast charging support. Thankfully, it is a notch-less mobile phone with slimmer, minimal bezels surrounding the screen display.

Hello, understand that the Galaxy A9 (2018) did not arrive with one camera, not two, not three but four cameras on the back, and each of this cameras are super filled with different purpose, aim, features and specs.

The Galaxy A9 (2018) quad-camera packs features such as ultra-wide angle camera, Auto-focus, and many more. Lets begin from the phone main 24-megapixels sensor with wide f/1.7 aperture, it takes regular photo shots on the back during both daylight and nighttime.

The Samsung signature still sits there, which uses the main camera pixel to combine 4 pixels into one during In low-light conditions. While at the front, the phone holds a powerful 24-megapixel selfie snapper with f/2.0 aperture. And it supports Face Unlock technology, Bixby assistant and Samsung Pay, Health and Bixby.

Several picture mode has been built into the Smartphone camera, portraits is one of them, night scenes, Intelligent Scene Optimizer, it recognizes food / plants etc. Spectacularly, it uses learning machine to detects when a subject blinks or is blurry, and immediately removes the photo, for you to pick one.

Like the Galaxy A7 (2018), the phone comes with a mid-range processor, and it is powered by a Qualcomm Snapdragon 660 chipset running at 4x 2.2GHz + 4x 1.8GHz Octa-core processor. The chipset is similar to Nokia 7 Plus and BlackBerry Key2. And it runs on Android 8.1 Oreo with Samsung add-ons.

The handset comes in two different variants, 6GB or 8GB of RAM, both with 128GB of storage and it is expandable up to 512GB of additional storage via microSD card slot. Under the hood, the Samsung Galaxy A9 (2018) phone comes with a 3800mAh battery capacity, with fast charging tech.