We were officially welcomed into the year of bezel-less design, later on to Notched era and looking from all aspect, 2019 might be the year of Pin-hole display.

Samsung electronic is bringing high-end competition to the Asian market, they have successfully launched the Samsung Galaxy A8s Smartphone in China.

Well, the Pin-hole display isn’t all ‘notchy notchy’, but what about replicating the Galaxy A8 2018 by incorporating two holes for dual selfie cameras? Will Samsung withstand that?

If you haven’t seen a Samsung Galaxy Smartphone in the A-series with LCD IPS screen, then this is the Galaxy A8s Smartphone.

The Samsung Galaxy A8s opens the door to the pure and unique notch display ever for a mobile handset, it is tiny and just like a Pin hole.

Samsung is calling it Infinity-O design, the Samsung A8s comes with a tiny Pin hole design, which houses the phone’s selfie camera and it is located at the top left of the display.

New designs on Smartphone are emerging every now and there, and starting from the bezel-less design, all their aim is based on that ridiculous ‘100% true bezel-less display screen’

After years of avoidance, it seems that the notch design has won, but Samsung is still looking for a way to skip the notch display, and this their best shots.

Becoming the first mid-range phone in the Galaxy A-series to arrive with LCD display, first to add an “s” to the end of its name, and the first to come with a pin-hole design at the left side of the screen.

It is rumored that the Samsung’s S10 flagship, which is to arrive in 2019 is also rumored to feature the Infinity-O display. There is no headphone port.

Killing the headphone port and embracing the notch display are two features that Samsung has used against Apple. Google is also in the picture of mocking Apple for the ‘no headphone port’

But today, the both company’s have launched Android Smartphones, Pixel 2 with no headphone port. Well, it goes on, and on and on like that. I wonder how Apple are feeling now?

There is the IP68 rating, rear mounted fingerprint sensor, and Samsung made the phone to be available in three amazing gradient colors: Blue, Gray and Green.

Aside from the design, display and other impressive features surrounding the device. The Galaxy A8s comes with the Galaxy A7 triple rear camera, and a single front selfie shooter.

At the back, you will find a triple vertically stacked cameras, the main 24-megapixel sensor with f/1.7, + 10-megapixel as the telephoto sensor with f/2.4, which also offers 2X optical zoom. 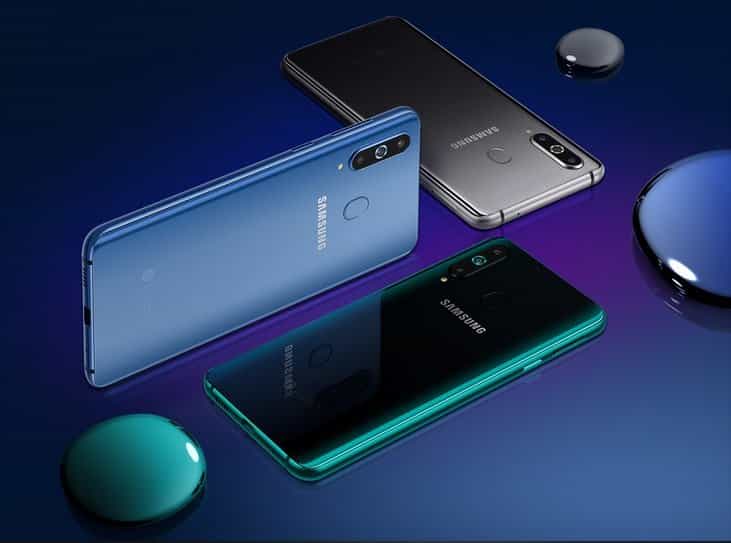 For the graphic performance, it comes with Adreno 616 GPU. And available in two variants, 6GB and 8GB RAM options, both with 128GB internal storage.

Thankfully, any of the models can be expanded up to 512GB via micro SD card slot. The Samsung Galaxy A8s packs a 3,400mAh battery with fast charging support over USB-C.

Under the hood, the Galaxy A8s runs on Android 9.0 Pie out of the box with Samsung’s UI on top. The pre-orders for this phone will commence on 21st of December.

Prior to this notice, the Huawei’s Nova 4 and Honor View 20 were prepared to unveil on December 17th, and December 26th with the trending Pin-hole display!