This is one of the best Smartphone from Samsung that is affordable, and budgeted.The company made this announcement ahead of the ‘Galaxy A’ event set to be held on April 10.

The South Korean giant, Samsung electronics are slowly expanding the Galaxy A series family, and by doing that, they have successfully debuts the Galaxy A70 device. 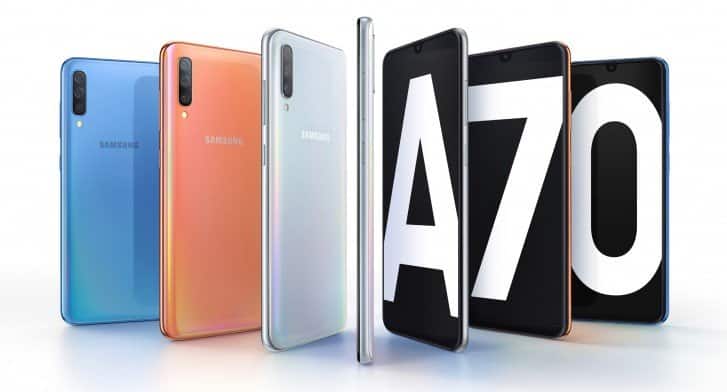 The Samsung Galaxy A70 Smartphone sports stupendous design, and the bezels are really minimal and a slight chin at the bottom of the screen display.

Galaxy A70 comes with a 3D Glasstic design, and a water-drop notch display. Other components of the phone, volume and power buttons sit on the right edge of the phone.

Samsung’s Infinity-U display has already been known as the water-drop notch display, and at the back, sits a triple rear camera setup aligned vertically.

Galaxy A70 phone comes with a fingerprint sensor scanner, which is not embedded at the back, but it is built right inside the screen display of the phone.

Like most of the Samsung Galaxy’s phones, it comes with One Handed Navigation, and it is available in Black, Blue, Coral, and White colour options.

For photography, and video coverage, the handset comes with four cameras, a single front facing selfie snapper and a triple rear camera setup.

While the Galaxy A70 handset comes with a Infinty-U display, which houses a single 32-megapixel camera sensor, as a selfie shooter with f/2.0 aperture, and it supports face recognition.

The Galaxy A70 Smartphone is powered by a Octa-core processor (Dual 2.0GHz + Hexa 1.7GHz) paired with 6GB and 8GB RAM options.

For the both RAM model, it comes with 128GB internal storage, and it is expandable up to 512GB via microSD card, with a dedicated slot.

The Galaxy A70 is fueled by a 4,500mAh battery capacity, with support for Super-Fast charging at 25W. This is the first Galaxy to go above 18W, aside from the Galaxy S10 5G.

Anyways, it still lacks wireless charging, though. Samsung Galaxy A70 runs on Android Pie-based Samsung One UI. Meanwhile, the pricing and availability still remains a mystery.