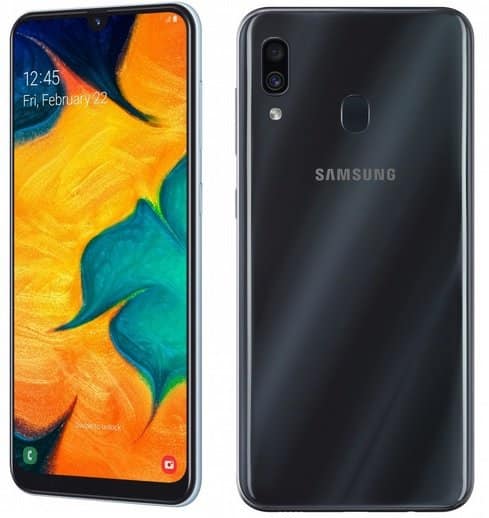 Samsung mobile is starting a new A series, and it has been unveiled, and here is the Samsung Galaxy A30 Android powered Smartphone with 6.4-inch Infinity-U Super AMOLED screens, and 4,000mAh battery capacity.

On Monday, the South Korean tech giant, Samsung electronics Monday unveiled the fresh Galaxy A Series phones – Galaxy A30 and Galaxy A50 device.

Thankfully, the Galaxy A series care focused on cameras, and they also arrive with bigger massive screen display. However, the both phones packs a lot spec differences.

However, Samsung will launch is holding an event on February 28 in Mumbai, where the Samsung Galaxy A-Series launch is expected.

Samsung is still planning on taking over the market share in India, after losing to Chinese Smartphone Giant, Xiaomi. Losing more of the market last year.

Recall that Samsung introduced the Galaxy M10 and Galaxy M20 sometime this year, which are seen as Galaxy M series. This isn’t different from the Galaxy A series.

The Samsung Galaxy A30 has more budgeted features, than the Galaxy A50. Anyways, you can find a 3D Glasstic design, which makes it look more shiny and amazing body build.

The 3D Glasstic design is the combination of both glass and plastic. The bezels at the top are reduced, but you can always find a chin at the bottom.

You can find the fingerprint sensor scanner, mounted at the back and it is available in two colors, that changes colors due to light.

Galaxy A30 comes with smaller camera spec than the Galaxy A50 device. Anyways, it arrives with three cameras in total.

While the Infinity-U screen display houses a single 16-megapixel sensor with a fixed-focus f/2.2 lens. And packs a brighter aperture, and also doubles as Face Unlock.

And the mobile handset comes with handful of network and connectivity feature, which includes the regular 4G, WiFi, Bluetooth etc.

The Galaxy A30 is powered by a Exynos 7885 with two main Cortex-A73 cores and six energy-efficient Cortex-A53 at 1.6 GHz processor.

And made available in two different models, there is the 3GB / 4GB of RAM, 32GB/ 64GB of inbuilt storage, which are expandable up to 512GB via a microSD card slot.

And it is fueled by a 4,000mAh battery capacity with Fast charging, which can last for few hours on a single charge. Anyways, the phone comes with Samsung Pay, and the pricing and availability are yet to be known.

“We are committed to providing meaningful progress to everyone for a better mobile experience, and that innovation starts with the upgraded Galaxy A Series,” said DJ Koh, President and CEO of IT & Mobile Communications Division at Samsung Electronics. “People are changing the way they connect, and their smartphones need to keep up. Our new Galaxy A Series offers improvements to the essential features that will support these live interactions, with diverse options to meet their ever-changing needs.”