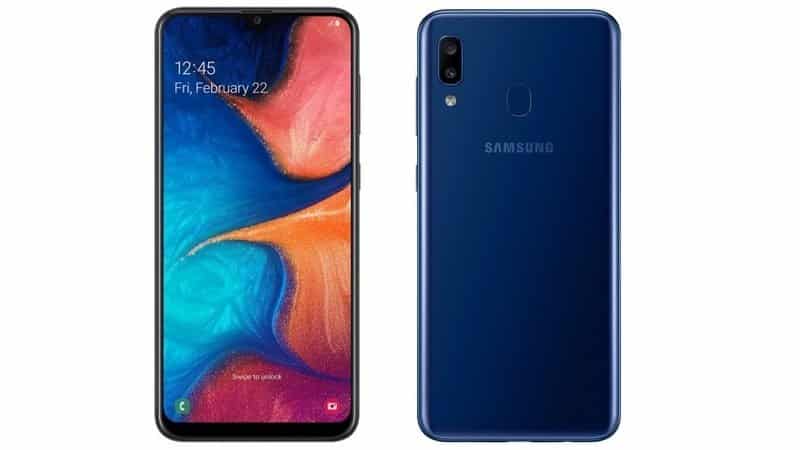 Samsung Galaxy A20 Smartphone is now official, and it sports a 6.4-inch Infinity-V display and 4,000 mAh battery capacity, and powered by an octa-core Exynos 7884 SoC.

Samsung launched the Galaxy A20 in Russia, and others included in the event are Galaxy A50 and the Galaxy A30. Which has already been unveiled last month.

The South Korean tech giant, Samsung electronics has launched its A-series and M-series in spectacular ways, and this series are meant to overtake the budgeted market.

Recall that the company unveiled the Galaxy A10, A30, Galaxy A40 and Galaxy A50 Smartphones recently, but today, Samsung expanded the series, by adding the Galaxy A20.

Between the device, the Galaxy A20 arrives with some similar specifications and features, that are identical to others in the family.

The Samsung Galaxy A20 is a cutting edge Smartphone with some trendy specs, and it is the latest member of Samsung’s 2019 Galaxy A-series device.

It sports an expressive design on the back, which includes the combination of the glass and plastic, and Samsung is calling it “3D Glasstic design”

Galaxy A20 arrives with a 6.4-inch HD+ (720×1560) Super AMOLED panel, and there is the Infinity-V display, which is Samsung term for water-drop notch display.

And it boast of smaller bezels around the screen display, but as always, there is a chin at the bottom of the mobile handset.

At the back of the Galaxy A20 device, you can find a rear-mounted fingerprint sensor for authentication, and support for Samsung Pay is also available. Arrives with a 158.4×74.7×7.8 mm dimension.

For the optics of the phone, Samsung is not incorporating the multiple cameras but you can as well find a dual rear camera and a single front-facing lens.

The Infinity-V display, which is held at up front of the screen houses a single 8-megapixel camera with an f/2.0 aperture for selfies.

Like the Galaxy A10 chipset, the phone is powered by a Exynos 7884 SoC, with frequency of 1.6GHz and six efficiency cores with a clock speed of 1.35GHz.

The Samsung Galaxy A20 comes in one single variant, it is a 3GB of RAM and 32GB of inbuilt storage. As usual, the phone comes with expanded microSD card up to 512GB.

And the Galaxy A20 is fueled by a 4,000mAh battery capacity, which might includes fast charging support. The phone also runs on the latest Android OS.

For availability and pricing, the phone is priced at RUB 13,990, $217 /€191 /Rs. 15,000. If you are interested, then you can get the device in Russia from Samsung brand stores. For the global launch, the company has not said anything concerning that.