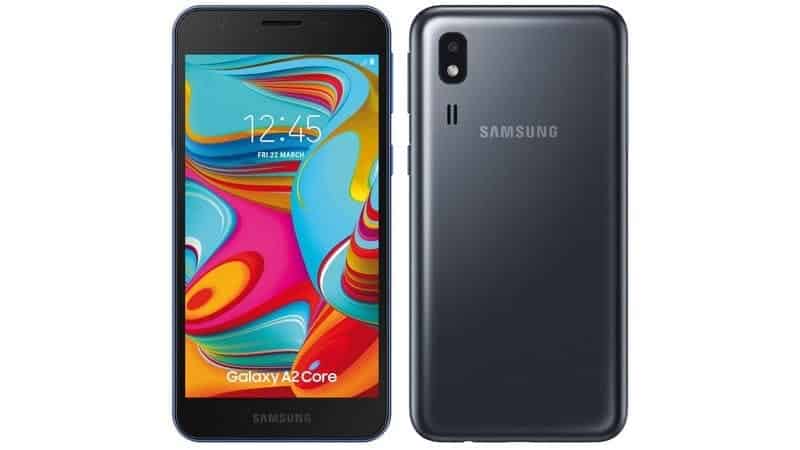 Samsung Galaxy A2 Core has been launched as an affordable Android Pie Go edition Smartphone with 1GB of RAM, 5-megapixel rear camera, 5-inch QHD display and powered by an Exynos SoC.

The Galaxy A2 Core mobile handset is a new entry-level Samsung smartphone that was officially unveiled in India. It is the direct successor to the 2018 August’s Galaxy J2 Core handset.

It is a 5-inch QHD (960×540 pixels) display, being an affordable smartphone. It is a notch-less handset with a single front facing 5-megapixel camera and a back mounted 5-megapixel lens.

The handset is available in Blue and black color option. The bezels of the phone are large enough to contain whatever, you might decide to throw on it.

Comes with 141.6 x 71 x 9.1mm dimension and will weigh at 142 grams. The Smartphone was announced silently, as the news is not available on the official Samsung website.

And it is powered by the Octa-core Exynos 7870 chipset (8x Cortex-A53 cores, Mali-T830 MP1, 14nm). paired with just 1GB of RAM and 16GB of internal storage, with expandable memory storage option. It also runs on Android Pie (Go edition).

If you are interested in purchasing a typical Android Smartphone, then you can easily order the Samsung A2 Core right now at INR 5,300, which is around $76 / €68.