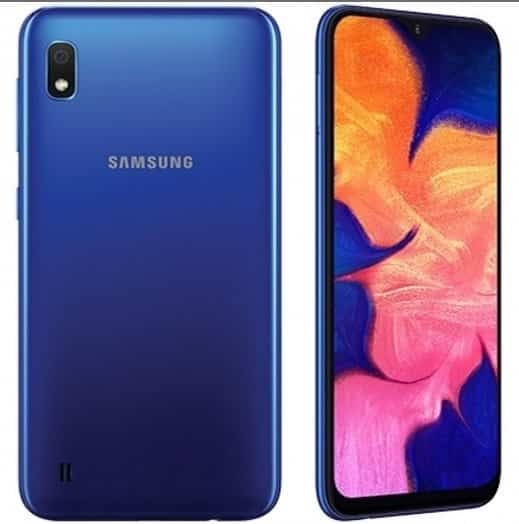 It was launched alongside with other Smartphone in the series, which includes the Galaxy A30 and Galaxy A50 mobile handset.

Recall that the Galaxy A30 and Galaxy A50 Smartphones were announced during the MWC 2019, but they have made it official today.

However, among the new Samsung Galaxy A series, the Galaxy A10 is the most budgeted among the series. But it still arrives with the Infinity-V display.

The Samsung Galaxy A10 Smartphone arrives with 6.2″ HD+ (720×1520 pixels) Infinity-V Display panel. And it looks smaller than the other series, thanks to the screen size.

And it is suitable for those and users that are looking for a minimal phone to use. But not a second phone for secondary uses.

Anyways, it will be available in Blue, Black, or Red color options. You can’t a fingerprint sensor at the back, because it lacks one, and it is built into the display.

For the optics of the phone, it arrives with two cameras, a single camera at the front and another at the back of the phone.

At the back, you can find a 13-megapixels with f/1.9 aperture. This is unlike other budgeted Smartphone with dual rear camera.

While the front camera arrives with a 5-megapixels with f/2.0 aperture, which is housed inside the water-drop notch display up front.

It arrives with handful of the regular network and connectivity, which includes WiFi, Bluetooth, etc.

The Samsung Galaxy A10 Smartphone is powered by a Exynos 7884 with two performance Cortex-A73 cores at 1.35 GHz and six more Cortex-A53 units, at the same frequency.

And it is available in one single variant, 2GB of RAM. Which isn’t bad for a budgeted Smartphone. Still profound for multitasking and switching of apps.

It comes with 32GB internal storage options, but if that is not enough, then you can add an extra 512GB of memory expansion via micro SD card slot.

And the mobile handset is fueled by a 3,400mAh battery capacity, and it runs on Android Pie and the company’s One UI on top of it.

Samsung is looking forward to take over the budgeted market share from Xiaomi in India, and they are trying to do this with the new Galaxy A series and M series.