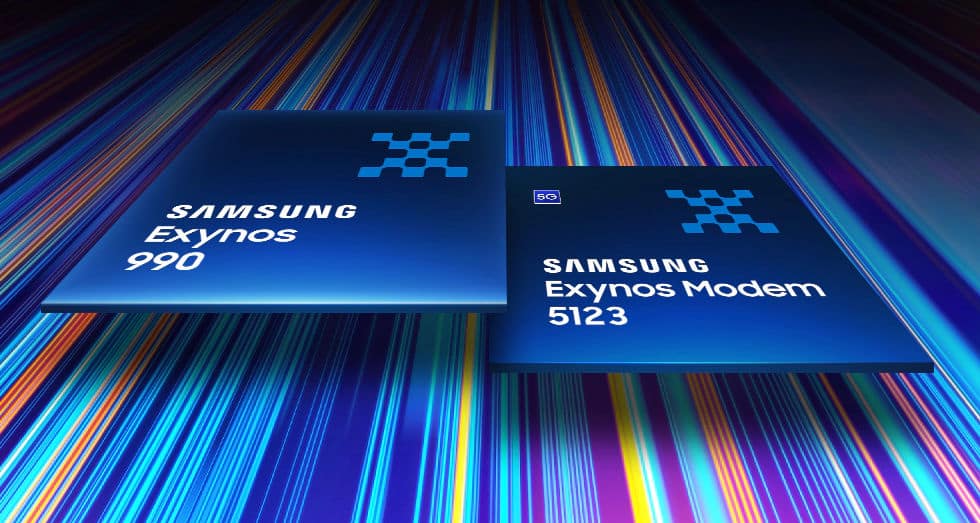 Samsung announces its latest flagship SoC, it is the Samsung Exynos 990 SoC with 7nm EUV lithography processing technology for better power efficiency, which supports up to 120Hz refresh-rate displays, LPDDR5, and up to 108MP camera.

Alongside the launch, the company also announced the Exynos 5123 5G Modem Chip. Meanwhile, the Samsung Exynos 990 SoC is the official flagship successor to the previous generation, the Exynos 980 SoC and the Exynos 9825 that was seen in the Galaxy Note 10 Plus.

The new chipset will be widely used to power the company’s next premium flagship phones, such as the next-gen off Galaxy Fold, Galaxy S11 and if the rumors aren’t true, the Galaxy Note 11 might come with it also.

Comes with a dual-core neural processing unit (NPU) and improved digital signal processor (DSP) that can perform over ten-trillion operations (TOPs) per second.

The Samsung’s Exynos 990 is backed by the Mali-G77 GPU, which the company says is the first premium GPU based on the Valhall architecture and it is claimed to bring a performance boost of 20 percent over the previous generation.

On the other hand, there is the Samsung 5G Exynos Modem 5123 chip, which is based on the 7nm EUV process. And supports network spectrums ranging from sub-6GHz 5G to 2G.

The company has also begun mass production of its 12GB LPDDR4X UFS-based multichip package (uMCP) for smartphones. We will start seeing the new chipset on their flagship phones by the end of the year.