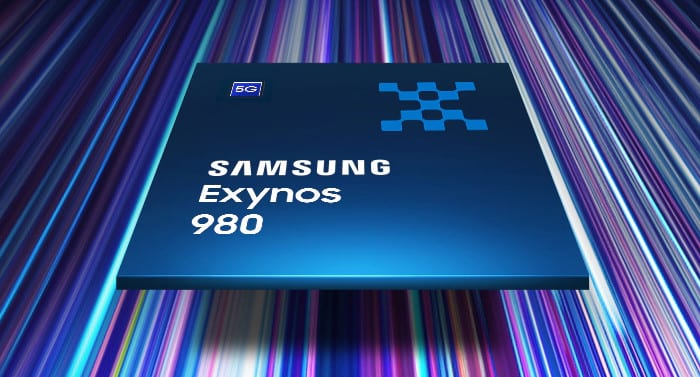 Samsung Exynos 980 8nm SoC has been announced as an 5G network solution for mid-range mobile phones. As it is officially integrated with 5G modem for up to 2.55Gbps download speeds, and it also supports 108MP camera lens.

The Exynos 980 is the company’s first 5G-integrated mobile processor, which is unlike the Qualcomm Snapdragon 855 and it also supports multi-mode capabilities, starting from 2G, 3G, 4G and 5G standards.

Alongside with the 8-nanometer FinFET process, the device support two high-performance Cortex-A77 cores and four Cortex-A55 efficiency cores and are paired with a Mali-G76 MP5 GPU.

During the launch, the company explained the idea behind the Exynos 980 8nm SoC, which he said that the new 5G-integrated chipset, aims to make 5G more accessible to a wide range of users.

According to the company launch, the Samsung Exynos 980 will able deliver 1Gbps download speeds on 4G LTE and up to 2.55 Gbps on sub-6GHz 5G spectrum. And it also supports dual 4G-5G connectivity, delivering speeds of up to 3.55Gbps. It also seems like the chipset lacks support for mmWave 5G spectrum.

For camera aspect, the Samsung Exynos 980 SoC up to five individual sensors and it is able to process three sensors concurrently for fuller multi-camera experiences.

Another impressive part is the availability of ultra-high resolution up to 108Mp, it uses NPU to detects scene or objects enabling the ISP to make optimal adjustments to white balance, exposure, hue, saturation, sharpness and more for professional results.

However, you can expect to see the new Samsung’s 5G chipset on mid-range phones, and might have the 108MP camera from early next year. The Samsung’s Exynos 980 will be in mass production by the end of this year.