Despite the trade-war, the company still boasts of 23 percent increase over the previous quarter, which is unexpected despite the Trump crackdown on Huawei products being sold on US soil.

In April-June quarter, Huawei made 221.6 billion yuan ($32.2 billion). The company sold 118 million Huawei smartphones in the first half of the year, 59 million in each quarter in the first quarter.

Which totally amounted to 220.8 billion yuan ($32.1 billion) in revenue for the same period, making up 55 percent of the company’s total sales. This is the first time Huawei is releasing more information than it historically ever has, the quarterly report in April was actually its first ever. 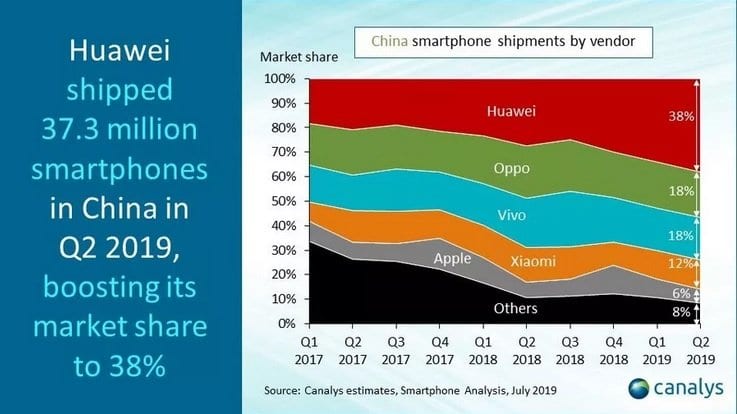 Huawei Chairman Liang Hua said in a statement “Revenue grew fast up through May, Given the foundation we laid in the first half of the year, we continue to see growth even after we were added to the entity list. That’s not to say we don’t have difficulties ahead. We do, and they may affect the pace of our growth in the short term. But we will stay the course.”

Due to the Trade-war, Huawei managed to grow 31 percent year-on-year to capture 38 percent share at home and China is responsible for its biggest markets share of 64% smartphone shipments. Whereby, according to the reports, all the company’s competitor such as Xiaomi, Oppo, Vivo, and Apple experienced Smartphone markets share declines.