Once upon a time in Hawaii, Where resident received emergency alerts about an incoming ballistic missile that turns out to be false but it has already done a lot of harm than good.

Residents in Hawaii were sent into shock following the after effects of false alerts about an incoming ballistic missile. All thanks, as the alert was quickly confirmed to be a false alarm.

The content of the message also warned that people should take shelter immediately. Hawaii outlets are reporting that it was sent in error.

Authorities confirmed the alert was an error, and Hawaii’s Governor David Ige said he was meeting with authorities to determine what caused the alarm.

According to screenshots, the alert read, “BALLISTIC MISSILE THREAT INBOUND TO HAWAII. SEEK IMMEDIATE SHELTER. THIS IS NOT A DRILL.” 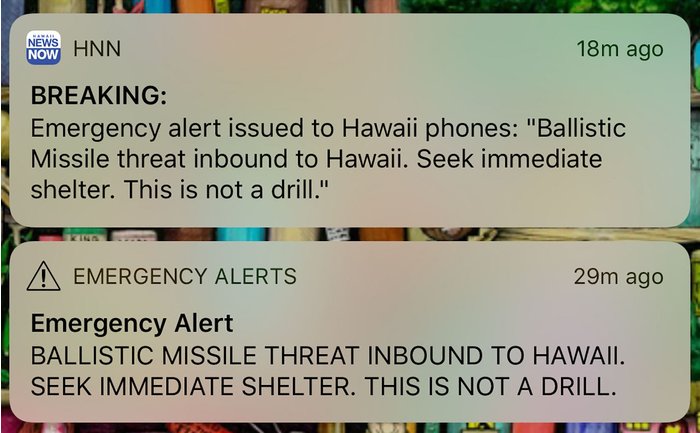 According to Governor David Ige, the false alarm was determined to be the result of human error:

“This should not have happened. We are investigating the sequence of events that occurred. An error was made in emergency management which allowed this false alarm to be sent. It was a procedure that occurs at the change of shift where they go through to make sure that the system is working and an employee pushed the wrong button.”

Well, this caused a lot of tension especially between the North Korea and America as they might be afraid of World War coming up!