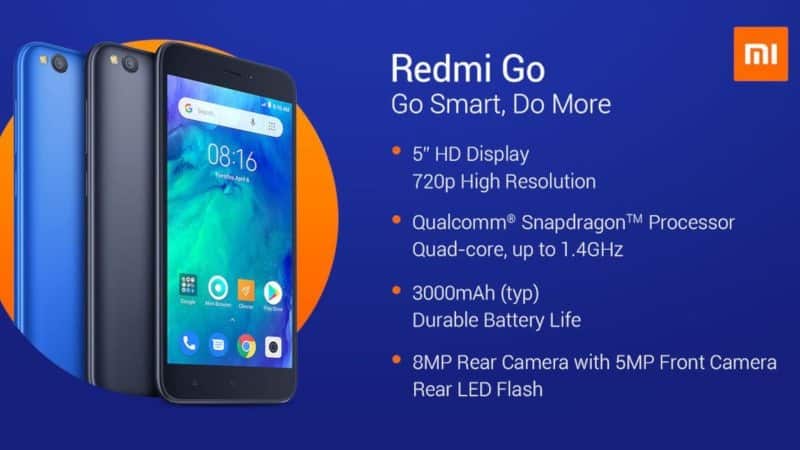 Like the name implies, the phone is completely based on Google’s Android Go platform. Nevertheless, there is no word on the release date or the pricing at this moment.

During the official launch on Tuesday, the company failed to elaborate on the Qualcomm Snapdragon SoC. But due to the leaks, it is expected to be entry-level Snapdragon 425 SoC.

The mobile handset packs some huge and bigger bezels at the top and bottom. Well, it is an entry-level Smartphone, what did you actually expect?

Apart from the massive bezels around the sides of the mobile phone. The Redmi Go arrives with 5″ HD Display 720p High resolution.

It lacks a fingerprint sensor at the back, and it is expected to arrive in two different colors, Black and Blue color options as it base.

While for the optic, the phone only comes with a single camera at the front, and another single lens at the back. But they can take amazing shots.

At the back, you will find a single 8-megapixel rear camera, which is supported by a LED flash. As you can take amazing night shots.

While for the front facing camera sensor, you can suit yourself with a moderate 5-megapixel front shooter in the smartphone.

No talk on Face ID Unlock, but packs a handful of network and connectivity: dual-SIM support, a Micro-USB port, Wi-Fi, Bluetooth 4.2, and 4G LTE connectivity.

The phone is running on Google’s optimized version of its operating system, making it the very first Smartphone from the company to run on Android Go out of the box.

It is completely powered by a Quad-core Qualcomm Snapdragon 425 SoC processor. Which will delivers quality battery efficiency, faster performance and more.

The Redmi Go Smartphone comes with a 1GB RAM, 8GB internal storage and can be expanded via a micro SD card slot. Allowing you to save more files.

Like the company indicated, the Redmi Go is surprisingly fueled by a 3000mAh battery capacity, which can provide longer battery life on a single charge.

The company is yet to comment on the pricing and availability. But it is expected to go on sale starting from next month, February. And can be purchased in Europe, for EUR 80 ($92).