Are you surprised with the design of this Red Hydrogen One Smartphone? It is a comprehensive mysterious Smartphone with some cool and funny design, specs and features. Anyways, we all should know that, Verizon and AT&T have confirmed that the Red Hydrogen One phone will be officially unveiled during this year’s summer.

One particular stuff on this strange-looking device is the cinema-camera mode on it. The Hydrogen One from Red Studios has been in rumors for so many months now but looking from all sides of the stories and leaks, we might be having the device sooner!

The phone is all about the camera. The price of the phone isn’t yet out officially but it is rumored to be priced at $1000 – $1300 for the aluminum model while premium titanium model might costs $1500 – $2000. Being said that, the device might either be overpriced after launch or low-priced. 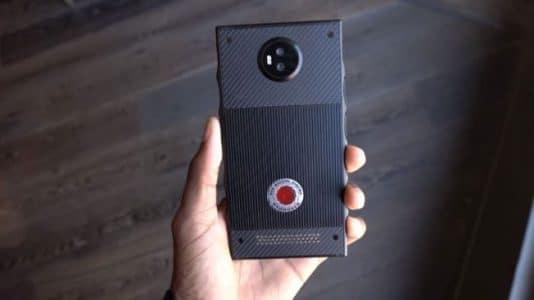 The Red’s Hydrogen One has the ability to display 3D content. And it promises to display “4V” holographic video content without the need for 3D glasses and also capture “H4V” (the company’s holographic file format) through a unique camera.

The bezels on the phone is actually thicker and more bigger. Thanks to heaven, it is not arriving with a notch display on the top. Red CEO Jim Jannard said “There is no way to describe or show the 4 view (4V) display other than seeing it in-person. There’s just no way,”

Being the best camera for its ranges and markets, you can move the phone to different direction swiftly and quickly but it will still display the 3D effect clearly in portrait and landscape. On the front facing camera, the phone sports two front-facing cameras to create the 4V look.

However, lets all wait till this year’s summer and see what Red company in partnership with Verizon and AT&T, could provide for us!