The Realme X7 Pro Ultra can also be known as Realme X7 Pro Extreme Edition, this is due to the machine translating from Chinese. And it is part of the company’s X7 series lineup, where the X7 Pro was unveiled last September.

When it comes to comparison between Realme X7 Pro Ultra vs Realme X7 Pro, you’d notice large differences and features. The most noticeable change is from a 120Hz FullHD+ flat AMOLED screen on the X7 Pro to 90Hz display curved edges on X7 Pro Ultra. 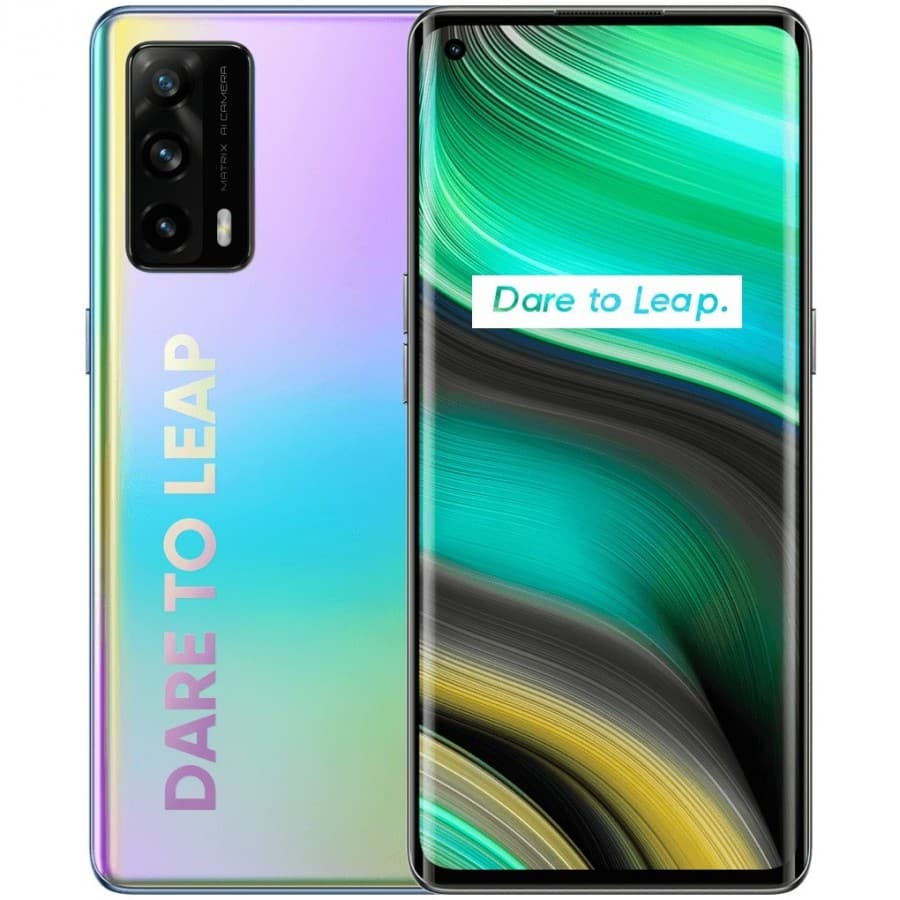 It sports a 6.55-inch AMOLED Full HD+ resolution with up to 1200nits brightness and boasts of 92.1% screen-to-body ratio with support for a 90Hz refresh rate that allows smooth scrolling feed and a 360Hz touch sampling rate.

Also noticeable is the logo on the rear panel, “Dare To Leap” text is now smaller and placed below the camera island, with the Realme logo on the opposite side and it is offered in two colors – Castle Sky and Black Clever Forest.

There is an in-display fingerprint scanner support, and still 7.8mm thick slimmer and weighs 170 grams lighter than the X7 Pro. There is a punch-hole display that still holds a 32-megapixel front-facing camera with impressive

Around the back, Realme reduced the numbers of cameras from QUAD on the X7 Pro to triple rear camera lens on the X7 Pro Ultra as its ditches 2-megapixels depth sensor.

Others remain the primary Sony’s IMX686 64-megapixel camera, an 8-megapixel ultrawide lens with a 119-degree FOV, and a 2-megapixels macro camera with a 4cm focal length.

It still features a glass back and the gradient version comes with an AG coating process and offers a 3.05mm ultra-narrow chin. Realme X7 Pro arrived with Goodix’s ultra-thin light-sensitive in-screen fingerprint solution so the thickness is reduced by 2.7mm.

There is support 15509mm² VC liquid cooling that can reduce the temperature by up to 10℃, the company explained, and a tactile Engine linear motor for realistic three-dimensional vibration.

Although, the global X7 Pro runs with Realme UI 1.0 based on Android 10. It arrives within different variants, there is the 8GB RAM and 128GB storage and 12GB RAM now with 256GB storage but lacks 6GB/128GB and 8GB/256GB memory options like the X7 Pro.

Identical to the Realme X7 Pro, the Extreme Edition still packs a 4,500mAh battery capacity that supports fast charging through the USB Type-C port at up to 65W which can fully charge it in just 35 minutes.

Other features include stereo speakers, Dolby Atmos, NFC, and 5G support. The handset is listed for reservations on retailer platforms like Realme China’s online store, JD.com, Tmall, and Suning. Availability outside China is yet unknown.