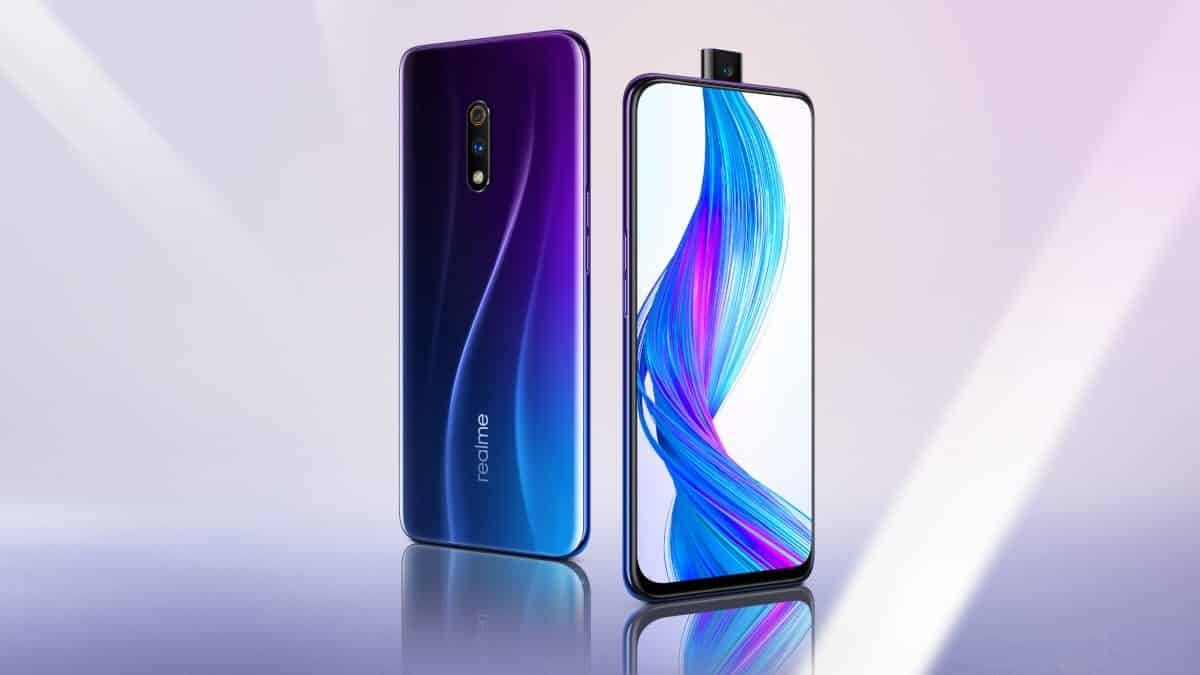 Well, this isn’t ground breaking unique features but it is the first time for Realme, to unveil such amazing and top notch Smartphone.

Alongside with the Realme X, they also announced the Realme X Lite mobile handset, which can be seen as the Chinese variant of the Realme 3 Pro.

Above is the quick specs of the handset. The gradient glass back with S-shaped curve design is definitely unique and quite stunning, being the company’s latest top-end smartphone, we aren’t surprised!

It sports a Samsung 6.53-inch Full HD+ AMOLED display with 2.2mm narrow border on the top and 1.62mm ultra narrow bezels on the sides.

The handset boasts of 91.2% screen-to-body ratio, which reduces the bezels around the screen display. But a chin at the bottom still stays there.

Being a notch-less Smartphone, it comes with a motorized pop-up mechanism behind the display, which houses only the selfie shooter at the front.

Realme X arrives with an optical six-generation in-display fingerprint scanner, which lights up the part of the screen overlapping the sensor to capture a fingerprint and unlock instead of an ultrasonic method.

It will be available in White and Blue colours options with gradient finish, but the company will also arrive with a special Naoto Fukasawa collection of the phone with finishes similar to onion and garlic peels and 8GB of RAM and 128GB storage.

Despite the impressive design, in-display fingerprint and other. The news cameras on the phone is just one of the biggest selling points of the phone.

At the back of the phone, sits a 48-megapixels with Sony IMX586 sensor and f/1.7 main snapper, and a secondary 5-megapixels f/2.4 for depth-sensor in portrait shots.

While the motorized pop-up selfie houses a single 16-megapixels with f/2.0 aperture, Sony IMX471 sensor, Beauty Mode and can launch in 0.74 seconds.

For safety purposes and assurance, the company touted that the elevating mechanism has been tested with 200,000 times. It uses pixel binning to combine 4 pixels into one for 12MP final images.

It arrives in 4GB / 6GB and the top end 8GB of RAM, for seamless multitasking and quick switching of apps. Also available in 64GB and 128GB of internal storage.

Sports a new gel cooling that reduces the temperature up to 15.2% in one hour. And it runs on the latest ColorOS 6.0 based on Android 9.0 (Pie).

The handset is backed by a 3,750mAh battery capacity with VOOC Flash Charge 3.0, which promises 0% to 55% in 30 minutes. This is definitely incredible.

While the collection by Naoto Fukasawa, with a special finish on the back inspired by onion and garlic peels with 8GB RAM / 128GB storage costs more at CNY1,899 ($275).