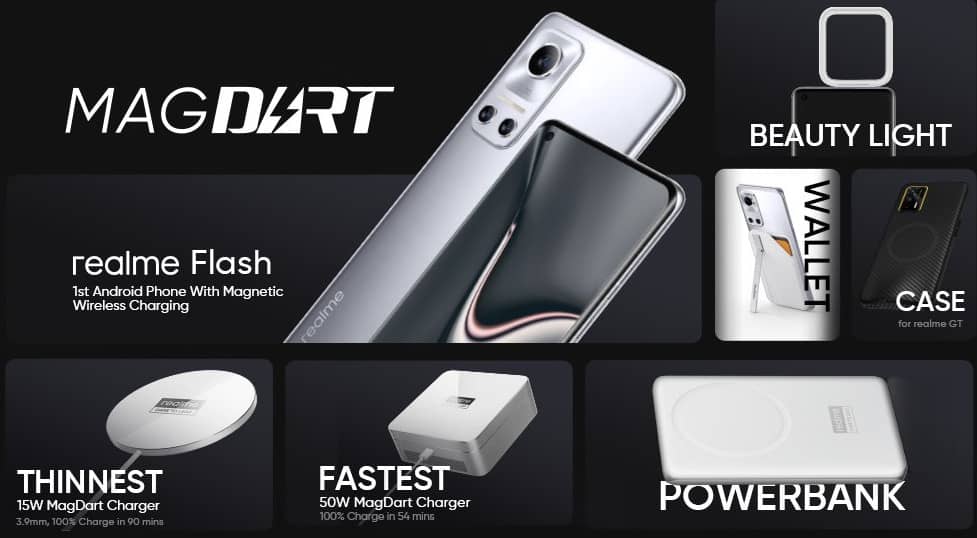 In a single wide-range introduction, Realme MagDart officially announced alongside an ecosystem filled with chargers and a selfie light. During the introduction, the company used a concept phone to display how the demo system will work – Realme Flash concept phone.

However, the company said that the Realme Flash phone is “the first Android Smartphone that Supports Magnetic Wireless Charging” but in reality, the already announced Realme GT is the first phone that users will be able to charge with MagDart.

In order to make that possible, Realme will introduce a case to enable the MagDart wireless charging on the Realme GT Smartphone, which does not come with the handset. On that note, it is worthy to note that similar cases can be launched for other models.

The Realme MagDart magnetic wireless case for GT comes with an intriguing design, and the fully functioning USB-C port is actually the best here, allowing you to either charge the phone with a cable or transfer some data. It sports a sporty aesthetic and a carbon bumper case with a built-in MagDart module.

Next is the 50W MagDart charger, it is more like a hefty adapter but the company claimed that it is the fastest magnetic wireless charger for smartphones in the world. Claims it can charge almost as using a wired 50W SuperDart charger.

Where a 4500mAh battery (Flash concept phone and the Realme GT) can be fully charged in 54 minutes and takes 5 minutes to charge 20% at 50W speeds. It comes with a built-in fan to stop overheating on both the phone and 50W MagDart charger and 1.5mm magnets.

Realme MagDart Power Bank Base is a wireless MagDart charger 2-in-1 system with a stand-type design. You can either the parts that support the phone as a power bank that detaches from the base and can be used to top up your phone on the go.

The Realme MagDart Power bank also doubles as a wireless charging stand, the magnets of the MagDart system can keep the battery attached while you use the phone and the whole body is completely covered with vegan leather and aluminum design.

Alongside, the company also announced a thin circular 15W MagDart charger, which is 3.9mm thinner than Apple’s MagSafe. This was unveiled if you don’t need the gigantic 50W charger with a built-in fan, which is not even a better travel companion.

In order to keep the 15W charger design thinner, the company move most of the circuitry closer to the other end of the USB cable, leaving only the coil on the other end, well, this is one clever way of handling those bulky designs.

Realme demoed the 15W MagDart Charger on the concept flash phone with a 4,500mAh battery fully charged in 90 minutes. As part of the MagDart ecosystem, Realme also introduced both MagDart Beauty Light and MagDart Wallet.

The company is like ‘it is an ecosystem, why don’t we just throw in a wallet, and call it MagDart Wallet” Here it is, the MagDart Wallet is more like your typical wallet, allowing you to hold three credit cards at a time.

MagDart wallet doesn’t come with any sort of power of any kind but features a built-in kickstand, which can easily prop up the phone while you watch a movie or hop into a video call. If there is any need for that, you can actually get one for yourself.

While we talk about wallets, wired, and wireless chargers, the company also spiced up the ecosystem with MagDart Beauty Light – It is a light with 60 LEDs for portrait photography. It is more like a case that has a flip-up ring light and helps improve the light for the camera.

The MagDart Beauty Light does not arrive with any built-in battery power storing system, but it is powered by the phone using reverse wireless charging. It gives you administrative control of both the brightness and the color temperature.

The company said “that it hopes to create an ecosystem providing technical standard support for more innovations and jointly create innovative magnetic accessories with more people with MagDart Fusion Plan. It will open the MagDart standard for everyone in the future, expanding MagDart’s uses and possibilities and welcoming more useful and cool products whether its AIoT devices or accessories.”

The Realme Flash phone is rumored to come with a curved screen, curved AG glass back, triple rear cameras, 4500mAh battery and is powered by Snapdragon 888 SoC. As of this time of writing this article, there is no mention of pricing or availability for the MagDart accessories/ecosystem.