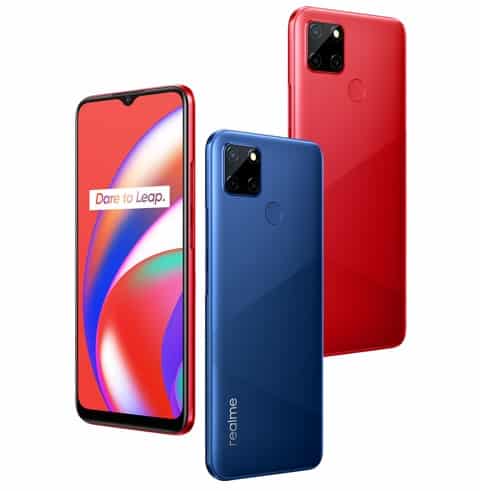 Chinese based Smartphone maker, Realme announced its latest mobile phone in the company’s C-series, it is the Realme C12 with a 6.5-inch HD+ mini-drop display, triple rear camera, and powered by a latest MediaTek Helio G35 SoC.

In Realme C-series, the company previously introduced the C15 smartphone in Indonesia last month. The new C12 was also announced in the country, but Realme is planning on announcing the two phones in India next week.

The Realme C12 comes in a single variant, and the major specs and features of the phone include the HD+ resolution, gigantic 6000mAh battery, and the Helio G35 chipset.

The Realme C12 packs a 6.5-inch HD+ mini-drop 20:9 display that boasts of 88.7% screen-to-body ratio. It features a waterdrop notch for its smaller 5-megapixels camera lens.

Inside the phone, there is the 2.3GHz Octa-Core MediaTek Helio G35 12nm processor with IMG PowerVR GE8320 GPU
RAM: 3GB RAM, 32GB internal storage, expandable up to 256GB via a microSD card slot.

The phone runs on realme UI based on Android 10 OS out of the box, and it comes with a massive 6000mAh battery capacity with 10W charging tech and support for reverse charging. It costs 18,99,000 Indonesian Rupiah ($128) in Indonesia.