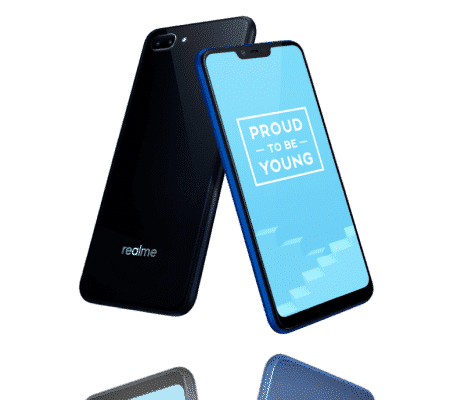 Recall that the Realme C1 arrived first last year, and it comes in only one model variant, which was the 2GB RAM. But the 2019 version comes in two different model.

Budgeted Smartphones in India is growing at a faster rate. Few hours ago, Samsung launched the Galaxy M10 and Galaxy M20. And they are planning on winning the market back from Xiaomi’s.

The Realme C1 (2019) comes with an impressive design and display, and you can find that astonishing curved design with smaller bezels.

Bezels surrounding the screen are smaller, slimmer bezels at the top and bottom. Although, you can still find that slight chin at the bottom.

It is completely protected by a Corning Gorilla Glass panel. And the it comes with a promising 88.8 percent screen-to-body ratio.

You can find the mobile handset with Deep Black and Ocean Blue colour options. The 2019 edition was announced, after the main Realme C1 reached 1 million sales milestone.

For the optics, it comes with dual cameras at the back, and a single front facing camera, which can take amazing shots, and enhanced with AI.

It comes with a dual rear camera setup of 13-megapixel primary sensor and a 2-megapixel secondary sensor, and it supports LED flash.

While for the selfie snapper, you can still find a 5-megapixel sensor. Which doubles as Face Unlock, and comes with portrait mode, PDAF, and an Intelligent AI Beauty feature.

The mobile handset is powered by a Octa-core Qualcomm Snapdragon 450 SoC, which is enhanced the phone’s performance and delivers battery efficiency.

Arrives with Adreno 406 GPU for graphic performance, where you can play intensive games. It was launched in two different models, 2GB and 3GB of RAM.

But both models comes with 32GB of internal storage, which is expandable up to 256GB via microSD card. And you can save more files, pictures, apps, games, etc.

It is fueled by a 4,230mAh battery capacity, which can last for a certain period of time on a single charge. The dual-SIM Realme C1 runs on Android 8.1 Oreo with ColorOS 5.1 skin