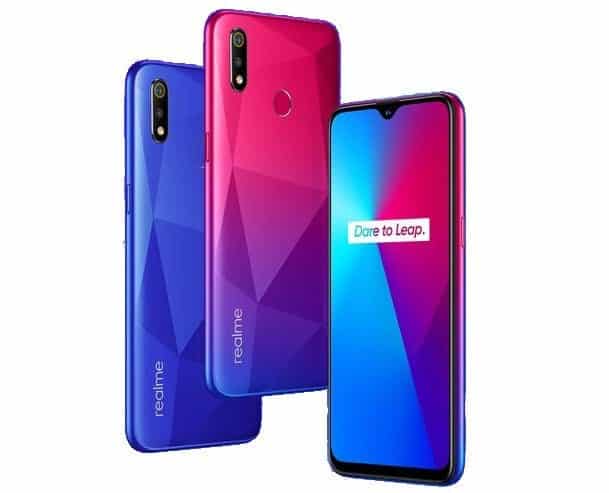 The Realme 3i is an Android powered device with 6.2-inch 19:9 display, dual rear cameras, diamond-cut back design, 4,230mAh battery capacity, 13-megapixels selfie snapper and powered by a Helio P60 SoC.

Lets me introduce you to the new latest smartphone in the Realme 3 series, it is the Realme 31 mobile phone. The device bears few similarities to the Realme 3 and Realme C2 device.

Realme 3i is officially announced in India as a new budget smartphone from the Chinese company and will compete with the likes of Xiaomi’s newly launched Redmi 7A.

Realme 3i packs a dual rear camera setup, which consists of a 13-megapixel rear camera with f/1.8 aperture, along with a secondary 2-megapixel camera for portrait shots. The phone has Chroma Boost feature that enhances the colors in pictures using AI and Nightscape for better low-light images. With a single 13-megapixels front-facing camera with f/2.0 aperture.

It is powered by a MediaTek Helio P60 12nm processor coupled with 3GB / 4GB of RAM, runs Android 9.0 (Pie) based on ColorOS 6.0 OS. With 32GB / 64GB of internal storage expandable memory up to 256GB with microSD, allowing you to store more files and documents.