Oppo recently unveiled the Realme 2 Android powered Smartphone on Tuesday and given the time frame, the Realme 2 was launched barely a month after the Realme 1. Competitively, the price is quite affordable and the both phones aims at the budgeted mobile phone markets.

Realme is a newly launched sub-brand by Chinese company, Oppo. The main reason for the daughter company, Realme, is to compete with Xiaomi’s affordable lineups, the Redmi series. Lets run down the specs of the Realme 1 and Realme 2!

And after a month, here is the Realme 2!

The Realme 1 comes in different variants, but the highest model, is the 6GB RAM. That means, it’ll deliver a smooth and seamless multitasking and performance. On the other hand, the Realme 2 is available in two variants, 3GB / 4GB RAM.

They are other bunch of differences, like the notch display while the similarities are quite few. Where you have the Facial recognition system, front selfie snapper, operating system, etc. Lets take a look at the below table, which contains the similarities and differences. 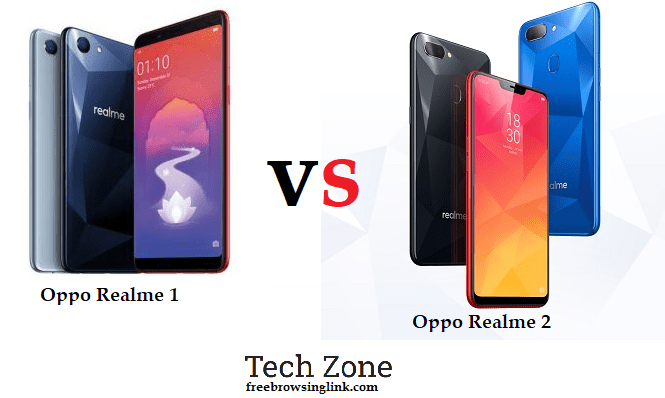 The design on the both phone are quite the same. Featuring the glossy and shiny diamond cutting edge and they are available in different colors. The company latest OS is top of the Realme 2, and the outdated one is available to Realme 1. However, the prices are different.