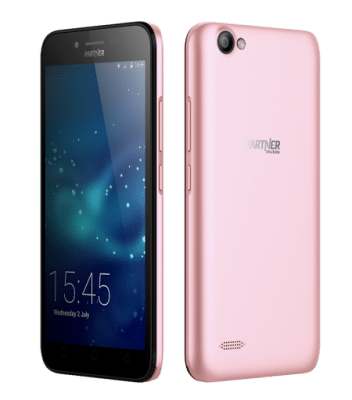 The Partner Mobile E16 is totally different from other Elite series, it is available in different colors, comes with 2GB RAM and runs on Android 5.1 Lollipop, although, that is three Android OS behind the Android 8.0 Oreo.

The company debuts the phone with a tag that said “Partner Mobile’s E16 is that 21st century phone you should have” and yes, it packs some impressive specifications and features. The phone comes with the normal Elite series display!

There is a 5.0″ inches display, with Capacitive 5-Point Touchscreen. And it offers more vivid and immersive view, when sliding through your photos, or watching videos / movies.

The phone comes with a single camera lens at the back, there is big bezels on the top and bottom of the display. Navigation buttons on the display of the phone, including the volume rocker and power on/off button are on the side.

The Partner Mobile E16 is the latest among the Elite series but it did not arrive with fingerprint sensor scanner at the back, and it comes with three amazing colors to choose from, Pink / Black and Gold.

The handset features a 5-megapixels front facing camera and 8-megapixels rear, and they are both equipped with a flash light to take amazing shots during night and under direct sunlight.

The network and connectivity includes WiFi, Bluetooth v4.0, Dual SIM, Radio FM, 3G, USB port and 3.5mm audio jack. While for browsing the internet, you have the 3G network. None of the Elite series has arrive with 4G LTE.

The phone is powered by a MSM 8909 Quad Core processor coupled with 2GB RAM, this allows for faster multitasking, seamless processor performance. It runs on Android 5.1 operating system.

The phone features an inbuilt 16GB storage and like others, it can be expanded up 32GB via Micro SD card, this allows you to store a lot of media files, apps and games. It is fueled by a 2500mAh battery capacity.

The handset is priced within the range of N40k – N50k and it is available in different stores all over the nation. The Partner mobile phone, the E16 is an Android powered device with premium specs, and crystal clear finishing.